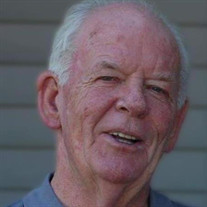 It is with deep sadness that the family of Bob Smith tells of his recent death on May 9, 2022. Bob was born January 27, 1945, in Grayson, KY. He is survived by his wife, Jody; their children, Amy (Chris) Thompson and Matthew (Kristen) Smith; and grandchildren Max and Jacob Thompson, Mackenzie and Quinn Smith, and CJ and Austin Carey, all of whom he loved and adored. He also leaves a brother-in-law, Ralph Ellstrom; nephews Eric (Connie) Ellstrom and Adam Ellstrom; half-brother Jeffrey (Hillary) Smith; and numerous cousins. He was preceded in death by his parents, Lonnie and Mabel Smith, and his sister-in-law, Judy Ellstrom. Bob was raised in the Detroit area and was a very proud graduate of Michigan State University. While at MSU he and Jody met and married; this fall they would have celebrated their 58th wedding anniversary. Upon graduation from Michigan State in 1966, Bob began his 30-year career with Michigan Bell (later SBC, Ameritech and AT&T), and he retired as a Division Manager in Traverse City, MI, in 1996. He loved his career, the opportunities it offered, and the way it allowed him to provide so well for his family. After his retirement, he wanted “a little something” to stay busy, so began his second career as a clerk at the Mapleton Hardware store, working two afternoons a week – a dream job for many men of his generation. He later joined the Elks Lodge in Traverse City, where he made many good friends and was always up for a good game of gin or poker (sometimes even both in one day). He fiercely battled a number of very serious health conditions later in life, always without complaint, and he liked to joke that he might have had more doctors than friends. The family’s deepest thanks go to Dr. Carl Anders, Medical Assistant Gwen Carter, Dr. Zachary Hector-Word, and Dr. Dino Recchia, for always looking out for him and treating him with the utmost respect and compassion. A nurse once told him he was a true Warrior – and she was so very right. Rather than a donation, please share a meal or have a drink with a friend and swap favorite stories about this man who loved life… for he truly did. A casual gathering will be held on July 23rd, from 2-4pm, at the Traverse City Elks to celebrate Bob’s life. Please feel free to share your thoughts and memories with Bob’s family at his tribute page at www.reynolds-jonkhoff.com. The family is being cared for by the Reynolds-Jonkhoff Funeral Home and Cremation Services.

It is with deep sadness that the family of Bob Smith tells of his recent death on May 9, 2022. Bob was born January 27, 1945, in Grayson, KY. He is survived by his wife, Jody; their children, Amy (Chris) Thompson and Matthew (Kristen) Smith;... View Obituary & Service Information

The family of W.R. "Bob" Smith created this Life Tributes page to make it easy to share your memories.

It is with deep sadness that the family of Bob Smith tells of...