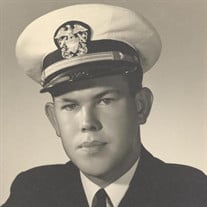 Wallace John Bruder, 101, passed away on Monday, June 7, 2021, at his Boardman Lake Glens home in Traverse City. Wally was born on May 27, 1920, in Rogers City, Michigan, to John F. and Amalia (Schlager) Bruder. He attended St. John’s Lutheran School in Rogers City through eighth grade and graduated as valedictorian from Rogers City High School in 1938. He went on to the University of Michigan in Ann Arbor, earning his B.S. in Mechanical Engineering in 1942. Wally was accepted to the Officers’ Training program at the U.S. Naval Academy in Annapolis, Maryland, receiving his commission on the morning of May 4, 1943. Later that day, Ensign Bruder married Sarah (Sally) Consaul of Mt. Pleasant at the Naval Academy chapel. The newlyweds drove across the country to Wally’s first duty station in Long Beach, California. During the war, he served as Engineering Officer on the YMS 114 minesweeper and was assigned to Destroyer Escort USS Seid as the war ended. Wally spent thirty-three years as a process engineer at The Dow Chemical Company. Between 1959 and 1977, he and his family lived in Paris, France, Rotterdam, The Netherlands, and Zagreb, Yugoslavia, where Wally aided Dow International in establishing new polystyrene operations. He returned to Midland in 1977 and retired from Dow in 1979. In 1984, Wally and Sally moved from Midland to Traverse City, where they were active members of the First Congregational Church. Wally was also a member of Elks Lodge 323, VFW Post 2780, and American Legion Post 35. He avidly pursued his lifelong passion for tennis, which began in Rogers City with no more than a board nailed to a stick. In retirement, Wally enjoyed Cherry Festival tournaments and YMCA league play until the age of ninety-five. Time zones were no obstacle to his watching the Australian Open; he set his alarm at 2:00 am to see his favorite matches live each year. A highlight of Wally’s later years was his Mid-Michigan Honor Flight to Washington, D.C. in 2016, especially the crowds who welcomed the veterans back to TVC. Wally is survived by his son, Dr. W. John Bruder (Dr. Carolyn Keith), his daughter Barbara York (David), seven grandchildren, nine great-grandchildren, his sister Betty Claus of Rogers City, and countless friends who loved him. He was preceded in death by Sally, his wife of fifty-six years, his sister Marilyn Heller of Rogers City, and his second wife of eighteen years, Joan C. Bruder. A memorial service will take place at the First Congregational Church on July 20th at 11:00 am. In lieu of flowers, contributions may be made to the First Congregational Church or Mid-Michigan Honor Flight. The family is deeply grateful to the staff of Boardman Lake Glens for their kindness and his fellow residents for their friendship. His last seven years there were among his happiest.

The family of Wallace John Bruder created this Life Tributes page to make it easy to share your memories.