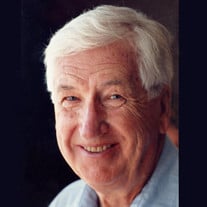 Walter Beardslee was born in Lansing, MI on August 29, 1920. He was the son of Walter and Ella (Simpson) Beardslee. Walter attended Lansing and East Lansing Public Schools and Michigan State University. Walt was a lettered cross country runner in college. Though a life long pacifist, he entered the Army in 1942 and served in Africa, Burma and Italy as an airplane radio man. After the service he returned to MSU where he received his Master’s Degree in Public Administration. He pursued graduate work at the University of North Carolina on the GI bill and later at Harvard University. In 1948 he married Elaine Lantta, who survives him, who was also a student at MSU. In 1951, he became one of the first four professors at the newly formed Northwestern Michigan College in Traverse City. He was hired to teach American History but also filled in as a librarian and cross country coach. He and Elaine built their own home in Traverse City where they raised their two children, Gretchen (Beardslee) Wiener and John. As the college grew, Walt taught history courses, political science, and eventually became the chairperson for the Humanities Department. In the 1960’s he began attending Harvard Summer School to further his education. His special project there was the study of John Adams. During four of those summers he brought along his family and they explored the east coast together. Favorite adventures included outings to Walden Pond, all parts of Boston, Mount Desert Island in Maine, Cape Cod, Louisa May Alcott’s, Adam’s and Emerson’s homes, Fenway Park, the Isabelle Stewart Gardener Museum and many trips to Durgan Park, the old New England Style restaurant in Faneuil Hall. Walt was a gifted storyteller and made these trips into architectural and historical odysseys. One summer, by chance, he met an architect from Walter Gropius’s famed architectural firm in Cambridge. Through his contact, they became the architects of the Fine Arts Building on the campus at NMC. Walt loved working in that building because of its beauty, the light, and the openness which allowed interplay between all of the branches of the humanities which were taught there. As a teacher he always taught history from a cultural perspective. Walt retired in 1985. In retirement he continued to sail his boat, golf, work on his son’s farm and travel. He made many trips with his wife to visit his daughter’s family in Long Island, NY, became very familiar with Manhattan and took a European trip with his sister. For 57 years the family cottage on Chaney Lake was a spiritual family retreat. For the past fifteen years, including 2017, he and his wife spent part of the winter in Bucerias, Mexico, where they acquired many friends. Walt as served in the Human Rights Boar in Traverse City, furthering a cause he was very passionate about. He also was an active supporter of the Community Living Center for disabled adults. Walt was an avid reader of history, mysteries, and newspapers. He did the New York Times crossword daily and regularly beat his family at Scrabble. He was an avid baseball fan and had a vast knowledge of past and present baseball trivia. Though he was a Tiger fan, he also loved the Cubs from an early age and was overjoyed when they won the World Series last year. Walt always enjoyed helping at the NMC BBQ which was an annual tradition. Walter is preceded in death by his parents and by his siblings Helen Maynard, and William and Perry Beardslee. He is survived by his wife Elaine of Traverse City, sister Bethany of Red Hook, NY, his son John and wife Lois of Maple City, daughter Gretchen Wiener and son in law Paul Wiener of Ann Arbor, and grandchildren; Jenny West of Manhattan and Gabriel Wiener of Philadelphia, as well as Jake and Maria Beardslee. He also leaves behind treasured nieces and nephews, and in memory Frodo, Maia and Senia. The exceptional first class of NMC who gambled on the new college have remained supporting friends. All who knew him knew Walt as a kind, gentle and generous man who made friends easily and loved Traverse City and sharing the often surprising details of America’s great history. A service in celebration of Walt’s life will be held on August 17, 2017 at 11:00am at the Bethlehem Lutheran Church in Traverse City. Memorial contributions in honor of Walt may be made to the Northwestern Michigan College Foundation or a charity of your choice. The family is being cared for by the Reynolds-Jonkhoff Funeral Home and Cremation Services.

The family of Walter Elmer Beardslee created this Life Tributes page to make it easy to share your memories.