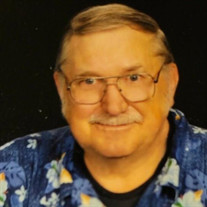 Walter David Galla of Cedar passed away on July 30, 2021 surrounded by the love of his family. Number 10 of 12 children to Michael and Regina (Brzezinski) Galla, Walter was born on November 28, 1939. After school, Walt joined the U.S. Army and was stationed at the Monteith Barracks in Furth, Germany. It was during this time when he met his wife of 60 years, Marga. Growing up on a farm with a large family, Walt learned to make do with what he had. He and his brothers could fix just about anything. He worked in construction for many years and retired from Rocky’s Upholstery in Cedar. Walt enjoyed hunting with his brothers, son and nephews, fishing, word searches, gardening, baseball and playing euchre with his family and friends from Cedar. He enjoyed spending time with the Lord and with his family. Walter was a lifelong, devout parishioner of Holy Rosary Church in Cedar and was an usher there for many years. In his younger years, he was a boy scout leader, he was one of the first volunteer members of the Cedar Fire and Rescue Department and one of the original members of the Cedar Hilltoppers when the snowmobile club went to property owners to ask permission to put in trails. Walt was always ready to lend a hand when people needed it. He helped build a lot of houses and finished cement for many people throughout the years. Walt will be greatly missed by his wife Marga (Topfer), his daughter Joyce (Mike) Pleva, his son, Larry (Carole) Galla, his daughter Sandy Galla and daughter JoAnn (David) Gauthier. He is also survived by his grandchildren, Brian (Jenny), Amanda, Gina, Dustin, Matt, Lexi and great grandchildren, Wyatt, Harrison, Charles Walter and Gage. Walter is also survived by his sister Esther Crocker, brothers Steve and Leon, sisters-in-law, Georgetta, Virginia and Gerry along with many cousins, nieces and nephews. One cannot forget, his napping buddy, Abbie. Walter was preceded in death by his parents, Michael and Regina, his sisters, Alvena, Dorothy, Susan, and Marie. He was also preceded in death by his brothers, Paul, Tony, Donald and John. Visitation will take place at Holy Rosary in Cedar Wednesday August 4, from 5 to 8 pm with a rosary being said at 7. A funeral mass will take place at Holy Rosary at 11 am on August 5 followed by a luncheon. Memorial contributions may be made to the Cedar Area Fire and Rescue in his name or for mass intentions. Walter and his family are being cared for the Reynolds Jonkhoff Funeral Home.

Walter David Galla of Cedar passed away on July 30, 2021 surrounded by the love of his family. Number 10 of 12 children to Michael and Regina (Brzezinski) Galla, Walter was born on November 28, 1939. After school, Walt joined the U.S. Army... View Obituary & Service Information

The family of Walter Galla created this Life Tributes page to make it easy to share your memories.

Walter David Galla of Cedar passed away on July 30, 2021 surrounded...