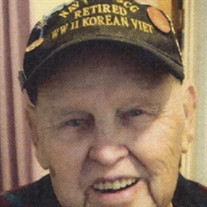 ACME- Walter Nathaniel "Shorty" Goff, 92, of Acme , passed away Friday, August 11, 2017 at The Grand Traverse Pavilions. Shorty was born on Thursday, May 28, 1925 to the late Alonzo and Nellie (Wooten) Goff in New Orleans, LA. He married the former Jennie Ann Plucker on Monday, September 15, 1947 in Traverse City. Shorty served our country as a member of the U. S. Navy from 1942 until 1946, and then continued to serve in the Naval Reserves from 1946 until 1948. He continued his service as a member of the U. S. Coast Guard from 1948 until he retired in 1965. Following his retirement he worked at the golf course at the Resort, drove taxi, was a truck driver, bartender and painter and taught at the Maritime Academy for seven years. He was very proud of his service to our country and was "our little war hero". A collector of many things, Shorty enjoyed collecting stuffed animals which he would give to cancer patients, especially children, at Munson Medical Center. He would become Santa at the holiday's, and along with Rudolf would visit kids with cancer, something he did for over 10 years. He also collected t-shirts and hats from area businesses to present to Veterans at Christmas. Shorty enjoyed collecting beer from around the world, his lighthouse collections and other collections that he was proud of. He always took time to visit Veterans in area nursing homes and at Munson. Shorty was a member of Bethlehem Lutheran Church, the VFW, AML, Eagles, Masonic Lodge and the Marine Corp League. He will always be remembered for giving of himself for other, his energy, but most importantly, his love and devotion to his wife, daughter, grandchildren and great grandchildren. He is survived by his loving daughter, Sandra Lynn (Dan) Vipond of Williamsburg; his grandchildren, Jennie Anne (Peter) Fay, Joshua (Janice) Vipond, Jeremiah W. Vipond, and Jordan F. (Ashley) Vipond; his great grandchildren, Payton, Mallory, Mary Kate and Piper Fay and Danielle and Brittany Vipond. He was preceded in death by his wife of 70 years, Jennie; his parents, his siblings, Alonzo P. Goff, Jr, Oscar B. Goff, Sr, Marie Clutterbuck and a sister who died in infancy. The visitation for Shorty will begin at 10 a.m. Tuesday, August 15, 2017 at Reynolds-Jonkhoff Funeral Home with the funeral service beginning at 12 noon. Burial will be in Acme Township Cemetery. Shorty asked that he be remembered through memorial contributions to VFW Cherryland Post 2780, the Marine Corp League or to his family. "Grandpa isn't passing away, he is going to watch Tiger Woods in his prime, on a comfortable couch, and have a yard with only baby turkeys...because there are no mean ones in heaven." - Jordan

ACME- Walter Nathaniel "Shorty" Goff, 92, of Acme , passed away Friday, August 11, 2017 at The Grand Traverse Pavilions. Shorty was born on Thursday, May 28, 1925 to the late Alonzo and Nellie (Wooten) Goff in New Orleans, LA. He married... View Obituary & Service Information

The family of Walter N. "Shorty" Goff created this Life Tributes page to make it easy to share your memories.