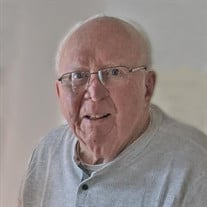 Walter “Wally” J. Wilczynski, 88, of Traverse City, went to his eternal rest on January 25, 2021. Wally was born in Detroit on February 21, 1932 to the late Walter and Bessie (Podzorski). On June 9, 1951, Wally married his forever companion, best friend and high school sweetheart, Joann Woloszyk, at the Holy Name of Jesus Catholic Church in Detroit. Walter owned/operated Van Dyke Meat Co. in the Poletown area of Detroit until 1973. He prided himself on the more than 1,000 pounds of fresh kielbasa he produced during Easter and Christmas every year; customers would line the sidewalk waiting for their holiday orders. He retired from the Wolverine Packing Company in 1994, where he provided meat and poultry to stores throughout Michigan. He was an avid Detroit Red Wings fan and was proud of the season tickets he held at Joe Louis Arena for many seasons. In 2003 he and his beloved wife decided to make Traverse City their home. Wally was an active parishioner at St. Patrick Catholic Church and spent many hours working in his yard and in his kitchen cooking and baking. Above all, besides his Faith, his family was everything to him. He loved to reminisce and he loved to laugh. Walter will always be remembered for being happy and sharing his happiness with strangers and friends alike. To know him was to know that there was always a smile on his face and that wonderful trait of his will be greatly missed. Wally is survived by his wife of 70 years, from whom he was inseparable, as well as his children; Michael (Janelle), Kathleen (Kent) and Brian (Maureen), his grandchildren; Matthew (Joanna), Andrew (Sarah), Elyse (Eastman), Zachary (Cailin), Emily (Taylor), Marcie, Neil (Hali); step grandchildren; Kelly (Scott) and Elizabeth. Great grandchildren Winter and Martin, and step great grandchildren Colter and Lyla, sister Marcy Stiefel, as well as many nieces, nephews and longtime Saint Patrick Parish friends. He is preceded in death by his parents and his sister Dolores Sheldon. A Mass of Christian burial will take place Saturday January 30, 2021 at St. Patrick Catholic Church at 11:00am. Those wishing an expression of sympathy may wish to consider a contribution to the St. Patrick Church Food Pantry. Please visit www.reynolds-jonkhoff.com to share your memories with the family.

The family of Walter "Wally" Wilczynski created this Life Tributes page to make it easy to share your memories.