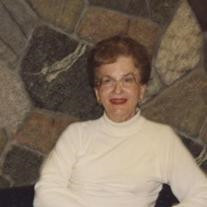 Traverse City - Wanda L. Beers, 90, of Traverse City passed away June 18, 2012 at Orchard Creek Supportive Care. Wanda was born on December 3, 1921 in Bath to the late F. Rae and Ethel (Swarthout) Gibbs. The family lived in the Laingsburg area and later moved to Lansing. A 1940 graduate of Lansing Eastern High School, she also attended the Lansing Secretarial School. After working for the maker of advertising films, she works for the Director of Civilian Defense during WWII and later for the Department of Social Welfare, Juvenile Justice division. On November 24, 1945, Wanda married the late Vernon L. Beers in Lansing. They lived for a year in Pasadena, CA, where she worked for CF Braun & Co., manufacturers of oil and refinery equipment. When Wanda and Vernon returned to the Lansing area she went back to work for the Department of Social Welfare until they moved to Traverse City in 1950. She was hired as the first employee of Northwestern Michigan College, serving as secretary to President Preston Tanis and all-around assistant to the five faculty members and 64 students for the college's first year. After raising her two children, she was employed as a probate legal assistant by the law firm Running, Wise, and Wilson until her retirement. While raising her family, Wanda was busy with various school-related activities. Before the schools had their own staff librarians, she ran the Oak Park Elementary School library for several years and coordinated other volunteer parents to help. While employed by the law firm, she was active in the Grand Traverse Legal Secretaries' Association. She attended Peninsula Bible Church and for a time assisted the board by keeping their meeting minutes. She enjoyed playing the piano and was a life-long avid reader, volunteering at the Traverse Area District Library following her retirement. She and Vernon spent several winters in Gulf Shores, AL. Wanda lived on Washington Street for almost 50 years. In 1964, she and neighbors Frances Koivisto and Ethel M. Bell circulated petitions in the Washington Street area to present City Comission seeking to preserve F & M Park, rather than having the city sell the land for residential or commercial use. She enjoyed watching the many activities in the park, particularly parade preparations for the National Cherry Festival. Since 2008, her home was Orchard Creek Supportive Care, where she was affectionatley known as "Wanda Lou". Wanda is survived by her daughter Suzanne (John) McCarthy of Traverse City, son Douglas (Ilene) Beers of Orchard Lake, brother Darwin Gibbs of Bath, sister Evelyn (Don) Wethy of Ludington and grandsons Spencer and Tyler McCarthy and Andrew Beers, an aunt Roberta McIlhenny of Myersville, MD and numerous nieces, nephews and cousins. She was preceded in death by her husband, Vernon in 1991, and be her parents. Visitation will be held at Reynolds Jonkhoff Funeral Home on Thursday, June 21, 2012 from 4 to 6 pm. Memorial contributions may be directed to Autism Speaks, Autism Speaks, 1060 State Road, 2nd Floor, Princeton, NJ 08540-1446, www.autismspeaks.org or Safe Passage, 81 Bridge Street, Suite 104, Yarmouth, ME 04096, www.safepassage.org.

The family of Wanda Louise Beers created this Life Tributes page to make it easy to share your memories.