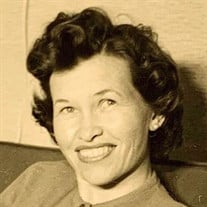 Our mother, Wanda (Bochniak) Dillon passed away peacefully at the age of 96 on Sept. 21, 2021 at French Manor South in Traverse City, after a short battle with old age. Born Aug. 25, 1925, in Acme Township, she was the daughter of Polish immigrants John and Stefania (Zawadzka) Bochniak. Wanda, a lifelong resident of the Traverse City area, grew up on Bunker Hill Road near Acme Creek, working outdoors on the farm, helping her dad work the horses, to get the hay into the hay mow of the barn, milking the cows, telling the dogs, in Polish, to fetch certain cows, by name!, catching fish in the creek and fireflies in her hands and laying in the field seeing animal shapes in the clouds. She had four sisters, Heromina "Herm" Typinski, Theodosia "Teddy" Sleder, Lenna "Lenna" Adams and Janina "Jean" Fuller. They all walked through the fields, yes - through the snow, uphill both ways, to the one-room Acme School. Graduating from Traverse City Senior High School in 1943, Wanda earned numerous awards for spelling, penmanship, shorthand and attendance. After school she went straight to work, starting her secretarial career at F.L. Jacobs Company and continuing for 25 years at the Parsons Corporation and David L. Stiffler and Associates, where her roles included receptionist, purchaser, comptroller and executive secretary. In 1981 she became an administrative assistant for the Land Department at West Bay Exploration, torturing her co-workers, "do NOT put that file folder in the wrong place!", for 30 years, finally retiring at age 85. At each company, she was known for her loyalty, hard work, attention to detail and punctuality. She was proud of saying that she never needed to use a resume to get the next job. It was at Parsons that she met her husband-to-be, our dad, Richard L. "Dick" Dillon. They were married on her birthday, Aug. 25, 1956. Their early days involved bowling and archery, neighborhood parties and camping vacations into Canada. Mom stuck with Dad and was a supportive and loyal companion throughout his engineering career and many entrepreneurial pursuits, including the building of two homes, a major marriage-tester, until his passing in 1999. What followed was a thumbing of her nose at old age as she went hot-air ballooning, parasailing and sky diving, Yes, sky diving. Oh and caring for her mother-in-law, our beloved grandmother, Blossom Jerue. And she didn't quit driving her car until age 90. Clearing her yard of branches, trimming her shrubs and snow shoveling her driveway were the routine. These and other shenanigans were witnessed by her wonderful neighbors, who often stepped in to help, included her in family gatherings and gave her a ride whenever needed. She loved them very much. Wanda is survived by her children, son, Thomas John (Barbara Bierlein) Dillon; daughter, Pamela Ann (Mark) Hallock; four grandchildren, Caleb Thomas Dillon, Makenna Hatter-Paxton, Stephen Howard Dillon and Carson Dillon Hatter. Also surviving are numerous nieces and nephews who spent time with her throughout her life and considered their aunt to be quite special. Mom's few months at French Manor South were made all the more special by the caring staff there as well as the wonderful Hospice of Michigan nurses. All of them adored our mom. At least that's what they told us. And mom showed her appreciation for their love and care. Sometimes. She was feisty until the end, achieving her two goals of turning 96 and not bothering us anymore. And her paper shredder chewed up volumes daily; guess you can't take the 'office' out of the 'girl.' She was adamant about us not holding a service or funeral in her honor, because "nobody wants to go to those things." We will have a get-together to honor her legacy at a later date.

Our mother, Wanda (Bochniak) Dillon passed away peacefully at the age of 96 on Sept. 21, 2021 at French Manor South in Traverse City, after a short battle with old age. Born Aug. 25, 1925, in Acme Township, she was the daughter of Polish immigrants... View Obituary & Service Information

The family of Wanda Dillon created this Life Tributes page to make it easy to share your memories.

Our mother, Wanda (Bochniak) Dillon passed away peacefully at...