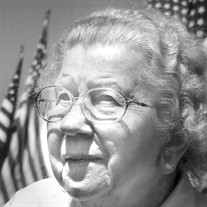 Wanda Theresa Martineau, who was as much a Traverse City fixture as Dill’s Restaurant and Bar, which she ran with her late husband, Francis “Hunce” Martineau from 1947 to 1970, died following an earthly journey of 104 years on Oct. 14, 2019 at The Villa at Traverse Point. She was the third youngest and sole surviving member of the large blended Bugai/Kasben Cedar farm family. In her preteen years she was assisting her mother, cooking over a traditional wood-fired stove when a pot of boiling water spilled onto her shoulder and right arm. The healing process left a notable scar, which she always kept covered in long sleeved attire in both hot and cold weather. For decades Wanda successfully juggled the life of a traditional housewife and working with her husband of 63 years making Dill’s the kind of community restaurant so rare today that catered to a wide socio-economic cross section of Traverse City. It was open six days a week from 6 a.m. to 11 p.m. with its legendary fish fries on Fridays that included sending dinners to the St. Francis Convent of Dominican nuns who staffed St. Francis School in the ‘50s and ‘60s. Following the completion of her Leelanau County Holy Rosary Parish grade school education Wanda came to Traverse City and enrolled in Central High School, graduating with a college prep degree in 1934. During the depth of the Great Depression and while attending high school, she worked as a domestic Monday through Friday for her room and board at a nearby home on Sixth Street but returned to the farm on the weekends. During World War II Wanda was in charge of the dining room in the Park Place Hotel that fed the officers and enlisted sailors of the hastily constructed Naval Air Station, the predecessor of the present-day Cherry Capitol Airport and Coast Guard Airbase. There, she met her future husband, Francis, who was the hotel’s assistant manager, marrying in 1945. The purchase of Dill’s Restaurant in 1947, the centennial year of Traverse City, established the basis for a true mom and pop family business lifestyle with their two children, Gerald and Zandra, who entered the workforce in their mid-teen years. Life was centered around the restaurant and dedicated involvement in volunteer activities connected with the nearby St. Francis Parish and School. For many of her years at Dill’s - now called the Blue Tractor and configured differently from the original restaurant and bar layout - Wanda supervised the wait staff, often working a split shift during the Monday thru Friday lunch and dinner hours. Wanda would return home toward the end of the 8:30 p.m. food closing for a short respite in her easy chair. The family dog, a toy fox terrier named Duke, would sit at her feet until she coaxed him into her lap, where he would curl up for a while nestled in her uniform that was infused with kitchen cooking smells from her day’s work. Wanda was a stickler for details, which could be seen in her insistence that she and the Dill’s staff maintained a proper, uniformed appearance while on duty. It also was reflected in her intense and detailed way of packing items for mailing that assured each item, no matter what, had the ability to arrive intact halfway around the world! The prime example of that was when she shipped a fully decorated birthday cake to her son, Jerry, to celebrate his 22nd birthday while he was stationed with the U.S. Army Corps of Engineers in Vietnam. Packing it securely on the bottom and sides but leaving the cake visible thru two layers of clear film top, it arrived safely 9,000 air miles away. In various St. Francis fundraisers, festivals and other events, Wanda would be in charge of decorating and supervising food and beverage in the school cafeteria or gymnasium. In her early retirement years she and Francis volunteered in the kitchen of the yearly Camp Roy-El for physically and mentally challenged youth. During summertime fair weather evenings, she would take in the beauty of the Grand Traverse Bay area with an automobile ride saying the rosary with husband Francis at the wheel. In later retirement years, Wanda fell and broke her leg and after rehab she and her husband entered assisted living, which Francis was extremely reluctant to do. Wanda, on the other hand, found that having other people responsible for the laundry, cleaning and food preparation was much to her delight after many years of being a working mom and wife! Survivors include daughter, Zandra, her husband Ken; son, Gerald; granddaughters, Marisa (Jorge) and Valerie and their mother, Anita; great-grandchildren, Cora and Evan, their father, Andy; as well as Jorge’s children, Hannah and Ava. Various members of the extended Bugai and Kasben families also survive. She was preceded in death by her husband on Sept. 15, 2006. Visitation for Wanda will take place on Friday, Nov. 1, 2019 at the Reynolds-Jonkhoff Funeral Home from 2 to 4 p.m. and 6 to 8 p.m., with the rosary being said at 7:30 p.m. The Mass of Christian Burial will begin at 11 a.m. Saturday, Nov. 2, 2019 at St. Francis Catholic Church with visitation beginning at 10:30 a.m. The Rev. Fr. Mitchel Roman will celebrate the Mass. Burial will take place at Grand Traverse Memorial Gardens following Mass with a social gathering at the VFW Hall following the graveside service. For a more lasting memorial, Wanda may be remembered through donations to The Father Fred Foundation, PO Box 2260, Traverse City, MI 49685.

Wanda Theresa Martineau, who was as much a Traverse City fixture as Dill&#8217;s Restaurant and Bar, which she ran with her late husband, Francis &#8220;Hunce&#8221; Martineau from 1947 to 1970, died following an earthly journey of 104 years... View Obituary & Service Information

The family of Wanda Theresa Martineau created this Life Tributes page to make it easy to share your memories.

Wanda Theresa Martineau, who was as much a Traverse City fixture...