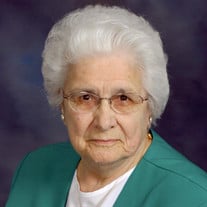 Traverse City – Wava Elizabeth Ronk, 90, of Traverse City, passed away peacefully at Munson Medical Center on August 1, 2015 with her family by her side. Born January 31, 1925, in Traverse City to the late Clarence and Sylvia (Groesser) Crain, she was the second oldest of five children. She was born at the family home on 9th Street with much anticipation from her older brother. Wava attended Traverse City High School graduating in 1942. On August 5, 1945 she married Melvin Ronk in a service in Traverse City. She worked at McDermott Insurance Company and Plamondon Eye Clinic, from which she retired. Wava will be remembered as a kind and strong woman who was giving of both her time and her talents. She donated her bookkeeping skills to Habitat for Humanity and was the organist at Mayfield Chapel and was the choir director at Emmanuel United Methodist Church. She loved her cottage on Long Lake where she enjoyed knitting, sewing and quilting. Her greatest love was her family and she enjoyed spending time with them. She was known as the family party organizer and she made sure that there was always plenty of hugs and homemade bread for all. Wava was preceded in death by her parents and her husband, Melvin, siblings, Lester Crain, Leona (Buck) Crain and Donald Crain. She is survived by her three children, Stanley (Patti) Ronk, Saundra (Todd) Hacker and Carolyn (Carl) Burkett, sister, Wanda Gray, 10 Grandchildren and 14 Great-Grandchildren. A memorial service to honor Wava will be held on Wednesday, August 5, 2015 at 11:00 a.m. at Reynolds-Jonkhoff Funeral Home, with visitation held one hour prior. Memorial contributions in Wava’s name can be made to Habitat for Humanity of Traverse City, Michigan.

Traverse City &#8211; Wava Elizabeth Ronk, 90, of Traverse City, passed away peacefully at Munson Medical Center on August 1, 2015 with her family by her side. Born January 31, 1925, in Traverse City to the late Clarence and Sylvia (Groesser)... View Obituary & Service Information

The family of Wava Elizabeth Ronk created this Life Tributes page to make it easy to share your memories.