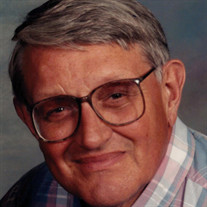 Traverse City - Wayne Elbridge Barber Jr., 83, of Traverse City, MI, and formerly Easton, PA, passed away peacefully in the care of his loving family on Easter Sunday, April 12, 2020. Wayne was born in Easton, PA on July 15, 1936 to parents Wayne and Anna (Trump) Barber. He grew up in Easton and eventually graduated from William & Mary College in Virginia. In Easton, he met his high school sweetheart and love of his life Janice Brown. They were united in marriage on December 17, 1960 and together they celebrated 59 years of marriage and their children Jeff and John. Wayne honorably served in the U.S. Army and afterwards found his vocation in insurance with Allstate as a manager. This led the Barbers to move to Milford, Michigan and eventually settling in Traverse City in 1983. He was a member of and deacon of The Presbyterian Church, was currently a member of Old Mission Peninsula Methodist Church, former member of the Cedar Rod and Gun Club, NRA, The Elks Club and American Legion. Wayne’s other passions included hunting, fishing, and cooking. Wayne is forever loved by his wife Jan; children Jeff (Lisa) Barber and John (Margo) Barber; grandchildren, Clint (Nadine), Wyatt, Emily, and Andie, great-grandson, plus many nieces and nephews. He is preceded in death by his parents, infant son Michael Barber and sister JoAnn Kautz. Those wishing to make gifts of remembrance are asked to consider Munson Hospice, Cowell Family Cancer Center, Old Mission Peninsula United Methodist Church and Cherryland Humane Society. A Celebration of Life for Wayne will be held at a later date. Share a memory of Wayne at www.reynolds-jonkhoff.com. Wayne and his family are in the care of the Reynolds-Jonkhoff Funeral Home and Cremation Services.

The family of Wayne Elbridge Barber Jr. created this Life Tributes page to make it easy to share your memories.