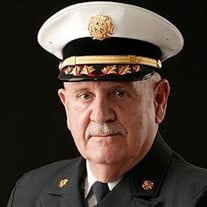 Wayne Hanna was born in Acme, MI, to Alfred and Lillie Hanna on July 29, 1936, and was the youngest child of eight children (Henry, Richard, Audrey, Vernice, Jack, Alice, Eugene) and yet he focused on being a son of God. He was a 1955 graduate of Central High School and was recognized for his achievements in football, Superintendent’s Council, Student Council, Junior President, baseball, and Future Farmers of America. He married his high school sweetheart, Joanne Eaton (daughter of Ward and Ruby), in December of the same year. In their 61 years of marriage, they had 6 children (Sheryl, Kelley, Natalie, Kyle, Kevin, Stacey), 14 grandchildren, and 10 great-grandchildren. After growing up on the family farm which was a working cherry orchard where Grand Traverse Resort and Spa now stands, and after working with his father in their commercial Acme-based fishing business, he founded Acme Welding Company with Harry Fox in 1966. They ran the successful welding company until Wayne became Assistant Fire Chief for Grand Traverse County. While Wayne celebrated countless achievements during his 50 years of fire service with accolades including: Chief Emeritus of Grand Traverse Metro Fire Station, Michigan Fire Chief of the Year 2004, President of the Northern Michigan Fire Chiefs Association, creating one of the safest communities in the country, and leading and mentoring countless firefighters in their craft; his true joys in life were his relationship with God and his family. In his free time, he enjoyed woodworking, fishing, sharing knowledge, and creating an environment where there were consequences and rewards for behaviors. He was an example of doing the right thing even if no one else was looking while encouraging those around him to reach for more and to be more. He enjoyed country, bluegrass, and gospel music and sang the Lord’s praises throughout his life. A truly humble man, he dismissed praise and was quick to pass the credit onto others. Wayne set expectations of those around him to be equal to his own expectations of himself. He asked for much because he gave much. His mantra in life was, “Faith. Family. Firehouse.” He believed that if he kept those priorities in order; life would work out well. He passed that mantra on and is an eternal part of his legacy. After the diagnosis of pancreatic cancer in August, he focused on the opportunity for everlasting life with his Heavenly Father while his children banded together and worked together on their parents’ home so Wayne could rest in peace. He joined his Heavenly Father with open arms on September 11, 2017. Wayne’s celebration of life with Fire Department Honors will be held at Grand Traverse Metro Fire Station One on Sunday, September 17th at 1 pm. The address is 843 Industrial Circle Traverse City Michigan 49686. Services are being held by Reynolds-Jonkhoff. In lieu of flowers, please feel free to donate to your local fire department. The family is collecting stories of memories with Wayne and any favorite "Wayneisms". Please share what Wayne means to you. The family has established an email account [email protected] for any electronic submission of stories, videos, photos, and etcetera. Also consider visiting Wayne’s tribute page to leave a memory for the family at www.reynolds-jonkhoff.com The family is being cared for by the Reynolds-Jonkhoff Funeral Home and Cremation Services.

Wayne Hanna was born in Acme, MI, to Alfred and Lillie Hanna on July 29, 1936, and was the youngest child of eight children (Henry, Richard, Audrey, Vernice, Jack, Alice, Eugene) and yet he focused on being a son of God. He was a 1955 graduate... View Obituary & Service Information

The family of Chief Wayne Hanna created this Life Tributes page to make it easy to share your memories.

Wayne Hanna was born in Acme, MI, to Alfred and Lillie Hanna...