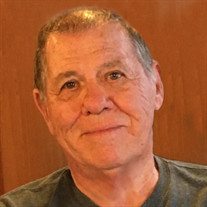 Wayne P. O’Connell passed away Feb 25, 2021. He was born on April 29, 1938, to a family that traces deep in American history, including involvement in the Revolutionary War, the Civil War, and every other major US armed conflict. He lived his early years on a small tobacco farm in central Tennessee, and then grew up in northern Wisconsin, which he described as one of life’s better experiences as he developed his love for the outdoors. After marrying his loved, true partner Kathleen Ann Sheahan in Detroit, MI in 1967, he moved to Traverse City in 1976. He enjoyed scenic beauty and had a love of place, especially for a quiet lakeside retreat in Benzie County and the backroads of The Keweenaw Peninsula, having attended Michigan Technological University. He loved exploring, learning, and reading; and his hobbies included travel, fishing, golfing, model railroading, boating, and restoring Willy’s Jeeps. He was an outstanding Texas Hold 'em player and a good friend to many, a member of the Traverse City Golf & Country Club, an avid supporter of Michigan State University athletics, and a winter resident of Marco Island, FL, where he spent 22 winters. Wayne is survived by his wife Kathleen, his son Patrick (Juan Calderon) O’Connell of Santa Rosa, CA, and his daughter Erin (Trebor Foco) O’Connell of Mt. Hood, OR. Also surviving is his sister Patricia (Dennis) Ziech of Marquette, MI, sister-in-law Patricia (Edward) Hollyer, as well as other family members, including a beloved niece and nephew. He was preceded in death by his parents Robert and Sara “Cathryn” (Spencer) O’Connell, his biological father Howard Frazier, and his brother- and sister-in-law Edward and Helen Sheahan. Those planning an expression of sympathy in Wayne’s memory may wish to consider a memorial to: Grand Traverse Regional Land Conservancy, Mount Minnie Project (3860 N Long Lake Rd, Suite D, Traverse City, MI 98684), the Father Fred Foundation (826 Hastings St., Traverse City, MI 49686) or Hospice of Michigan (10850 E. Traverse Hwy., Traverse City, MI 49684). His wish was that his ashes be returned to the earth in a place that he chose. Please feel free to share your thoughts and memories with Wayne’s family at his tribute page at www.reynolds-jonkhoff.com.

Wayne P. O&#8217;Connell passed away Feb 25, 2021. He was born on April 29, 1938, to a family that traces deep in American history, including involvement in the Revolutionary War, the Civil War, and every other major US armed conflict. He... View Obituary & Service Information

The family of Wayne O'Connell created this Life Tributes page to make it easy to share your memories.