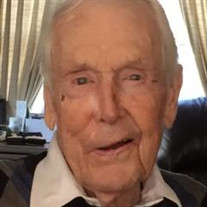 Born April 19, 1925 in Scott, Ohio, Wesley Rex McClain, at age 93, went home to Jesus Monday, August 20, 2018. Wesley was the first son of Clifford and Stella Penwell-McClain and one of five children: including his Brother Carl and sisters Ruth, Lois, and Donna (his only surviving sibling). Armed with an 8th grade education and a strong work ethic, Wesley’s early jobs were working on farms and in factories in Northwestern Ohio. On August 25, 1943, Wesley enlisted in the Army and soon shipped out with the 83rd Infantry Division of the 1st Army to England in preparation for the WWII invasion of France which was occupied by the German army. Landing on Omaha Beach shortly after D-Day, he was soon fighting through the hedgerows of France. Wesley was wounded July 4, 1944 (for which he received the Purple Heart). After recovering in England, Wesley rejoined his unit and continued fighting up through France and into Belgium, including duty on the front lines during the Battle of the Bulge. Wesley was in Germany on the Rhine River when the War ended. For his service to his Country, Wesley also received the Good Conduct Medal, European-African-Middle Eastern (EAME) Campaign Medal, five Bronze Stars (for campaigns in Normandy, Northern France, Rhineland, Ardennes and Central Europe), and the Victory Medal. Upon returning to Ohio after the war, Wesley soon met the love of his life, Sarah Mae Deatrick. They were married January 2, 1947 (and remained married and in love for over 71 years, until his death). Within a few years, they moved to Chelsea, Michigan where Wesley worked as a heavy truck test driver and mechanic for Chrysler Corporation on their proving grounds near Chelsea. In 1961, he purchased and moved his family to Golden Valley Ranch near Empire, Michigan where he and his family raised and trained horses, gave trail rides, boarded horses for local and summer clients, and held the annual Empire Rodeo. “All he ever wanted to be was a cowboy,” his wife, Sarah, would say years later. After selling the Ranch in 1972, Wesley and Sarah moved to Traverse City where he worked as a distributor for AMSOIL, Inc. Wesley was a dedicated and loving husband to Sarah, his wife, and his three children; John, Cliff, and Sue. Preceded in death by his daughter Sue and his parents. Wesley is survived by his wife, Sarah, his sister Donna Knapp-McNeil, his two sons, John (Julie) McClain (Tucson, AZ) and Cliff (Millie) McClain (Maple City, MI), his grandchildren Bridy (Chuck) Godwin (Tucson, AZ), Jonathan (Trisha) McClain (Albuquerque, NM), Jeremiah (Vicky) McClain (Las Vegas, NV), Sarah (Brett) Hayes (Traverse City, MI), Katelyn McClain (Las Vegas, NV), Kelli Rose McClain (Denver, CO) and great grandchildren Delany Godwin, Kaley McClain, Ethan McClain, Aiden Hayes, and Isabella McClain. Family and friends will celebrate Wesley’s long and wonderful life on Friday August 31, 2018 at the Reynolds-Jonkhoff Funeral Home in Traverse City, MI. Calling hours are 2:00 to 3:00 pm followed by a memorial service, which will include a military honor guard and tribute. For those unable to attend, the memorial service will be live-streamed at www.rjfh.tv. Those wishing an expression of sympathy are encouraged to direct contributions to the VFW Post #2780, 3400 Veteran’s Drive, Traverse City, MI 49684 or American Legion #35, 1231 Hastings Street, Traverse City, MI 49686.

Born April 19, 1925 in Scott, Ohio, Wesley Rex McClain, at age 93, went home to Jesus Monday, August 20, 2018. Wesley was the first son of Clifford and Stella Penwell-McClain and one of five children: including his Brother Carl and sisters... View Obituary & Service Information

The family of Wesley Rex McClain created this Life Tributes page to make it easy to share your memories.