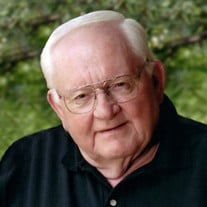 William (Bill) H. Alpers, 83, of Traverse City, passed away on Monday, September 9, 2019 at his home, surrounded by his loving family. Bill was born on March 26, 1936, to William and Evelyn (Brow) Alpers, where he grew up on the Alpers family farm, the youngest of 14 children. Bill attended and graduated from Traverse City Central High School in 1954. Bill married Virginia (Ginny) at St. Francis Catholic Church, on August 1, 1957. Together, they raised four sons, embracing the Catholic faith and education. One of the many profound accomplishments in Bill’s life was his strong support and commitment to AA, and the milestone of having celebrated 43 years of sobriety. Bill’s effervescent smile and work ethic was truly genuine. His business knowledge and determination for starting an insulation business, 41 years ago, has provided a tremendous resource for the construction community. Many home owners, home builders, commercial contractors and employees in the building trades have been positively influenced by Bill’s fortitude. Most humbly, Bill received many educational certificates and accolades throughout his business career. Several displayed tribute in various forms; professionalism, community leadership, generosity, and as an officer on the board of the Home Builders Association. Fall months were a particular favorite season for Bill. As an avid outdoorsman, he took his hunting skills very seriously and often mentored others on the rules, sportsmanship and safety of big game hunting. Hunting trips to Canada and the western U.S., with friends and family were a highlight for Bill, holding precious memories and building new friendships. Bill’s greatest achievements in regards to his love for nature and hunting was introducing his love for the sport and being a mentor for his grandsons and granddaughters equally. It was not unusual for a posse of the older grandkids to help track Grandpa’s deer in late fall, from Grandpa’s secret hunting spot in the woods. The ability to fix anything and everything that had a motor was often the description of Bill’s character offered by his grandkids. A true family man, Bill taught his sons how to fix, rebuild and reuse. This code of household ethics was affectionately passed down to his sons and grandkids, with an abundance of love and patience that Bill seemed to have an endless supply of. Music was a part of Bill’s soul, he enjoyed singing and playing the guitar. Bill appreciated all music, but had a passion for country music. Bill took many road trips with family and friends, when the opportunity presented itself. His many trips to the Grand Ole Opry, Branson Missouri, and the Great Smokey Mountains were most memorable, next to his hunting trips to Canada. The highlight of his love for music was when his grandkids would dance to his guitar playing and listen intently when he sang and played, “You Are My Sunshine”. Bill is survived by his loving wife of 62 years, Ginny; and sons; Greg Alpers, Scott and Rachel (Garno) Alpers, Ron and Landa (Kolarik) Alpers, and Randy and Yvonne (Evans)Alpers. Nine grandchildren; Melanie, Patrick (Emily), Daniel, Nicholas (Kaitlyn), Gwen, Kelsey, Abigail, Courtney, Hunter and Great-Grandchildren; Anna, Ezekiel, Titus, Elias and Boaz Alpers He was preceded in death by 13 siblings; Wilma, Dorothy, Helen, Marian, Charlotte, Elsie, Elanor, Elizabeth, Alvin, James, John, Lewis and Owen and a daughter-in-law, Deborah (Hansen)Alpers. The family would like to offer a special Thank You to all of the caregivers who have tended to Bill during his illness. Especially to those who have provided extended care; Dr. Ethan VanTil of Thirlby Clinic, and the nursing care staff from Hospice of Northern Michigan. Visitation will take place September 16, 2019 at the Reynolds Jonkhoff Funeral Home where the family will greet friends from 5-7pm. A rosary recitation with an opportunity for open sharing will begin at 7:00pm. A funeral Mass to celebrate Bill’s life will take place Tuesday September 17, 2019 at 2:00pm at St. Francis Catholic Church, with visitation one-hour prior. The Reverend Father Roman will be officiating. In lieu of flowers those wishing an expression of sympathy may choose to do so to the Safe Harbor program of Traverse City. Please visit www.reynolds-jonkhoff.com to share your condolences and thoughts with the family. Bill and his family are being cared for by the Reynolds Jonkhoff Funeral Home.

William (Bill) H. Alpers, 83, of Traverse City, passed away on Monday, September 9, 2019 at his home, surrounded by his loving family. Bill was born on March 26, 1936, to William and Evelyn (Brow) Alpers, where he grew up on the Alpers family... View Obituary & Service Information

The family of William 'Bill' Alpers created this Life Tributes page to make it easy to share your memories.