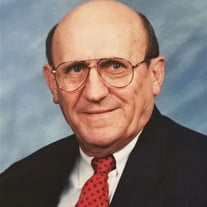 William J. Ballard Traverse City, Michigan – William J. Ballard, Sr. age 90, of Lake Ann, Michigan passed away on Sunday, August 25, 2019 at Culver Meadows. Bill was born at home in Chambers County, AL on June 30, 1929 to Joseph Olney and Annie Mae (Clements) Ballard. He married Constance Helen McNulty on Feb. 23, 1952 in Columbia, South Carolina, they were married for 65 years. Bill attended Opelika High School in Opelika, AL graduating in 1947. During high school, he was captain of the band, worked as a life guard, covered high school activities for the Opelika newspaper and joined the Junior Army ROTC. After graduation, he joined the Army, transferring to Alabama National Guard, to fulfill his military obligation. While attending Auburn Polytechnic Institute (Auburn University) graduating in 1954 with a Bachelor of Science in Secondary Education. During this period, his unit was activated in December 1950. While activated he received the rank of master sergeant, realized he enjoyed organizing and teaching others. Bill earned his Master’s degree in Television from Syracuse University in 1955. Bill and his classmates ended up in the "Closed Circuit Educational Television" industry, a new frontier of television, later to become PBS. His professional career in public television started in 1955 at Auburn University. Bill came to Delta College before it even opened its doors in University Center, MI in 1961. While there he became director of television, station manager, and taught classes to the students of Delta’s Channel 19 and was head of the broadcasting department. Mentoring students was his hobby and he wrote over 200 letters of recommendation. He retired in 1986. He described his broadcasting career of 32 years as exciting, stressful and varied but never dull. He and his wife Connie were able to turn their hobby of collecting antiques, into a small antique business called Connie's Antiques in Honor and Wilson's in Traverse City for many years. He has been involved with the Rotary Club in Midland and Frankfort, active with WIAA at Interlochen and Dennos Museum. He and Connie were avid fans of the Old Town Playhouse, traveling the world and salmon fishing in Frankfort. Bill adored his wife Connie, his children, grandchildren, and great-grandchildren. He was always a good listener, and was always talking to those around him whether it was his legislator or the guy sweeping the floor. Bill is survived by his children; William (Karen) Ballard, Laura (Steven) King, Charles Ballard, Madeleine Carey; 9 grandchildren, Andrew (Lauri) King, Zeb King, William (Andrea) Ballard III, Michael Ballard, Robert (Stephanie) Ballard, Melissa Ann Carey, Laura Constance Carey, Meghan Taylor and Alexa Hettwer; and 7 great-grandchildren, Colton and Sawyer King, Logan, Dalton and Payton King, Lucas and Dylan Ballard. Bill was preceded in death by his parents, 2 half-sisters, and 1 brother. A celebration of Bill’s life will take place at 3:00 pm on Friday, September 27, 2019 at Reynolds-Jonkhoff Funeral Home. A visitation for family and friends will begin one hour prior to the service. A reception will take place at the funeral home immediately following the service. In lieu of flowers it was Bill’s request that memorial contributions be directed to; Benzie Senior Resources, 10542 Main St, Honor, MI 49640 or American Legion Post 35, 1231 Hastings St, Traverse City, MI 49686.

The family of William J. Ballard created this Life Tributes page to make it easy to share your memories.