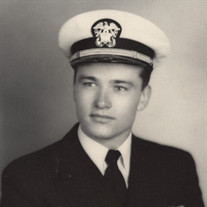 TRAVERSE CITY - William (Bill) C. Becker, age 94, of Traverse City, passed away Tuesday, May 1, 2018 at the Grand Traverse Pavilions in the loving care of his family. Bill was born on March 9, 1924 to William J. and Vivian B. (Morningstar) Becker in Detroit, MI. Bill grew up in Detroit where he attended and graduated from Redford High School. After graduating from high school, Bill enlisted with the United States Navy in December 1942 and was honorably discharged in April 1945, having attained the rank of Av Cadet. Bill was a pilot while in the Navy, and he performed his training take-offs and landings onto an aircraft carrier in southern Lake Michigan. After serving his country, Bill briefly moved back to Detroit, and then moved to Elk Rapids, MI in 1948 where he worked alongside his father at William J. Becker Company (wholesale electrical supplies). They moved the company to Traverse City in 1952. Bill became the sole owner and president of the company in 1960 until 1984, when it was sold. Bill met his wife Mary Lou (Shreatte) in Traverse City, and together they had six children. Mary Lou passed away unexpectedly in November 1988. Bill is survived by his second wife, Shirley Ann (Pillars) Becker, his children; William L (Mary), Paul G (Eve Rogus), Cheryl E, Valerie G Brandt (Wayne), and Mary D Kuzner, (17) grandchildren, (3) step grandchildren, and (13) great-grandchildren and (2) step great-grandchildren. Bill is also survived by three nieces (Gail Turnquist, Linda Pyle and Laura Lagana), one nephew (John Turnquist) and, as well as his sister, Ruth Turnquist. Bill was preceded in death by his parents, first wife, Mary Lou, daughter, Anne Marie and sister, Shirley. For relaxation Bill enjoyed playing golf, up to six times a week after his retirement - including 3 hole-in-one’s, was a member of the Traverse City Golf & Country Club for 25 years, tennis until his knees said no more please, and boating on Grand Traverse West Bay with his wife Mary Lou and the kids. Later in retirement he enjoyed the mastering of the most difficult of jigsaw puzzles - at times taking up most of the dining room table to complete. He also performed numerous tasks at Manitou Gardens Nursery, which was run and owned by his second wife Shirley. In honoring Bill, anyone who wishes to direct an expression of sympathy may direct their contribution to the Cherryland Humane Society, 1750 Ahlberg Road, Traverse City, MI 49686 or a charity of their choice in memory of Bill. In honor of Bill’s wishes, cremation has taken place and Bill will be laid to rest at Grand Traverse Memorial Gardens.

TRAVERSE CITY - William (Bill) C. Becker, age 94, of Traverse City, passed away Tuesday, May 1, 2018 at the Grand Traverse Pavilions in the loving care of his family. Bill was born on March 9, 1924 to William J. and Vivian B. (Morningstar)... View Obituary & Service Information

The family of William Charles Becker created this Life Tributes page to make it easy to share your memories.