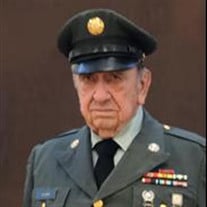 William "Bill" Clark, 89, of Buckley, died November 16, 2021 Bill was born September 16, 1932, in Montville, CT, son to Wilson and Rose Clark (Paciardo). In 1940 Bill’s family moved to Groton, CT because his dad got a job building submarines. Bill made it through the eighth grade and began fishing for clams and scallops. He sold them to the local markets for about $4 per bushel (now clams sell for more than .90 each!) In 1949 Bill joined the Army. Following basic training at Ft. Dix, he was deployed to Germany and served in the German constabulary (occupation of Germany). He left the Army after 3 ½ years, only to re-enter service 2 ½ years later. He remained enlisted until his retirement in 1971. Bill’s last tour of duty was in Vietnam. Unfortunately, Bill, like many other of his comrades suffered from the effects of Agent Orange for the rest of his life. Despite that, he was very proud of his honorable service to his country. He earned the rank of 1st Sgt E8. Bill was a gifted mechanic and worked on everything from tanks, jeeps and armored personnel carriers. Following his retirement from the military Bill moved to Buckley, where he remained until his passing. He farmed and worked at both Haney and Joslin Chevrolet (what is currently Williams Chevrolet) as a mechanic. Bill was dedicated to the community of Buckley, serving on the village council for 13 years. Bill leaves behind his wife of 53 years, Fran; children Thomas and Richard Clark, Dale Sheldon Jr., Kelle (Tracy) Tyson, Dave (Penny Waldschmidt) Clark and Robert Sheldon; and numerous grandchildren, great-grandchildren, nieces, nephews and extended family. In heaven Bill joins his parents; sons William Clark Jr. and Rex Sheldon and sisters Delores Clark and Barbara Peeler. Memorial Contributions may be directed to Fran Clark. A funeral service will be held Monday, November 29, 2021,11:00 AM at The Buckley Tabernacle Church. Visitation will begin at 10:00 AM and continue until the time of service. Those wishing to share memories and condolences may do so on Bill’s Tribute page, www.reynolds-jonkhoff.com

The family of William "Bill" Clark created this Life Tributes page to make it easy to share your memories.