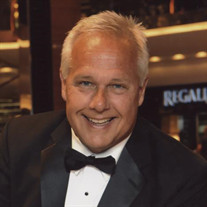 William Scott Holmes, 67, of Traverse City passed away March 22, 2019. Bill was born on September 24, 1951 in Wyandotte to the late William Harold and Yvonne Reva (Glore) Holmes. Bill graduated from Bentley High School in Livonia in 1969. He then went on to study at Central Michigan University where he earned his Bachelor’s Degree in Business Management. Bill worked for Burroughs Corporation for 32 years, starting in the purchasing department and after working his way up he retired as the Director of Supply Base Management. Bill married the love of his life, Rosanne Marie Roy on September 26, 1975 in Detroit. Together they raised their children Ryan and Kelly in Howell and retired to Traverse City in 2015. Bill and Rosanne loved to travel and particularly enjoyed cruises. At the start of each vacation, he would joyously announce to his family that he was O.V. (on vacation!) He also enjoyed taking his family camping when they were young. Bill had a passion for landscaping and on the weekends could often be found taking care of his property. His gardens, pond and lawns were always manicured perfectly. The family would often join in on what he called Family Fun Time, but to most would be considered chores. Even though it was work, Bill always made it fun. Above all else, Bill cherished his family, especially his grandchildren who called him Papa. Bill loved having all of his extended family and friends over to their home for gatherings. Christmas was always one of his favorite times of the year. Bill will be greatly missed by his wife of 43 years Rosanne, daughter Dr. Kelly (Nick) Covell, son Ryan (Lisa) Holmes; grandchildren Logan, Grant and Parker Covell, Yvonne Holmes and her soon to be born sibling. Bill was preceded in death by his parents and brother Barrie. A visitation will be held at the family home on Tuesday March 26, 2019 from 6 - 9 pm. The memorial service celebrating Bill's life will be held at 11 am on Wednesday March 27, 2019 at the Reynolds Jonkhoff Funeral Home with visitation beginning at 10:00 am. A memorial gathering will be held on April 6, 2019 from 11 am - 2 pm at the First United Methodist Church of Brighton. (400 E. Grand River, Brighton, MI 48116) In lieu of flowers, memorial contributions may be directed to the Friends of Sleeping Bear.

The family of William "Bill" Scott Holmes created this Life Tributes page to make it easy to share your memories.