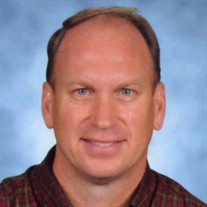 William “Bill” Francis Julian, 55, of Traverse City, passed away unexpectedly Nov. 13, 2021. Bill was born in Bay City, Jun. 25, 1966. He attended and graduated from Bay City Central High School. Bill was involved with the school’s athletic program, excelling in football and basketball. Following graduation, Bill earned bachelor and master’s degrees from Central Michigan University. In 2003 Bill moved to Traverse City, met and married Katharine McKenzie and began a family. Bill spent his professional life teaching and coaching. When he moved to Traverse City, he taught at St. Francis High School. He then took a position teaching social studies at East Middle School, where he remained until his passing. In 1989 Bill earned his pilot license, followed by becoming a certified flight instructor in 1990. Bill loved to fly, and loved the outdoors. He was an avid hunter and fisherman. He was known for his love of animals, especially for his Labrador Retrievers. He volunteered his time and distributed joy, with the help of his canine companion at Munson Medical Center. He was also a steward with the Leelanau Conservancy. Bill leaves behind his wife Katherine McKenzie; daughter Elizabeth “Betsy;” mother Mary Ann Coryell; siblings Dennis (Tammie), Greg (Molly), Sue (Steve) and Jim (Leslie); step-mother Carol Julian; as well as many family members and friends. He was predeceased by his father Vern Julian and step-father Charles Coryell. Visitation will be held from 4-7 PM, Thurs. Nov. 18, at Reynolds-Jonkhoff Funeral Home. A memorial service is set for 1:30 PM, Sat. Nov. 20, at Grace Episcopal Church in Traverse City. Bill's memorial service will also be livestreamed at, www.gracetraversecity.org. Memorial contributions may be directed to a charity of one’s choice, or to the Leelanau Conservancy, www.leelanauconservancy.org/donate. Memories and condolences may be shared on Bill’s tribute page, www.reynolds-jonkhoff.com

The family of William "Bill" Julian created this Life Tributes page to make it easy to share your memories.