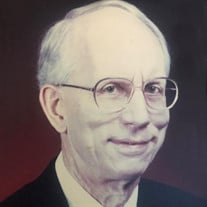 William Frederick Braeuninger died on July 30, 2020. After suffering a fall in March, his health steadily deteriorated. He was born in Springfield, Illinois on September 18, 1938 to William B. and Doris (Achelpohl) Braeuninger. He graduated in 1956 from Royal Oak Dondero High School as class Salutatorian. In 1960, he received a Bachelor’s Degree in Economics from Harvard College and graduated in 1963 from the University of Michigan Law School. After graduation, Justice Howard Kelly offered him a position as law clerk in the Michigan Supreme Court for two years. On July 18, 1964 Rick married Joyce Jumisco at Emmanuel Lutheran Church in Dearborn. Rick continued his law career as an attorney in Lansing, maintained a private law practice in Gaylord, and finally served as Senior Vice President and General Counsel at Michigan Gas Utilities, in Monroe, from which he retired. Throughout his life he held many volunteer positions, and particularly enjoyed serving on the Monroe Memorial Hospital board. Rick was a brilliant student and outstanding athlete. He followed his grandfather into the field of law. He loved listening to music, particularly jazz, and enjoyed attending many live performances over the years with Joyce. He also loved all sports and was a St. Louis Cardinals and true Michigan Wolverines fan. He relished being Up North at his cottage on Higgins Lake. He and Joyce spent many years with the family at the cottage and it was always a special place to him. He enjoyed northern Michigan so much that after his retirement, he and Joyce moved to Traverse City where he spent the remainder of his life. Rick was a person of highest integrity who always conducted himself in the most ethical manner. He was honest in all matters. He had a brilliant mind, was a voracious reader, and there was virtually no topic that he couldn’t have an informed conversation about. He was interested in others and never forgot someone’s name. The greatest joy in Rick’s life was the love he had for his wife, Joyce, who sadly died in 2018, and his two daughters, Catherine Elizabeth and Margaret Doris. After raising two daughters, he was thrilled to be blessed with four grandsons. Rick will be greatly and sadly missed by his daughters and their families, his other relatives, and his many friends. Rick is survived by his daughters Catherine Elizabeth (R. Michael) Lewis and Margaret Doris (Bradford W. III) Shaw; his grandchildren, Benjamin W. Lewis, Alexander M. Lewis, Bradford W. Shaw IV, and Maxwell H. Shaw; his sister, Janet Miller; and brother-in-law, Richard Miller. Burial was in Roseland Park Cemetery, Woodward Avenue and Twelve Mile Road, Berkley, on August 2, 2020. Any memorial contributions may be made to a charity of the donor’s choice. Please share any memories at www.reynolds-jonkhoff.com

William Frederick Braeuninger died on July 30, 2020. After suffering a fall in March, his health steadily deteriorated. He was born in Springfield, Illinois on September 18, 1938 to William B. and Doris (Achelpohl) Braeuninger. He graduated... View Obituary & Service Information

The family of William Frederick Braeuninger created this Life Tributes page to make it easy to share your memories.