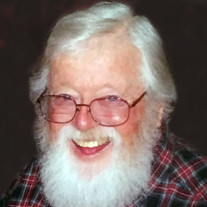 William “Bill” A. Byrnes, 77, of Maple City passed away October 27, 2019 at home with his wife at his side. On October 16, 1942 Bill was born in Detroit, MI to the late Edward William and Irene Mae (O’Hara) Byrnes. Bill spent his early years in Ontonagon, MI where The Byrnes clan (father and Uncles) built the Silver Sands Hotel near the porcupine mountains. The family later moved downstate to Wing Lake in Bloomfield Twp. Mi. where he graduated in 1960 from Bloomfield Hills High School. Bill went to work at GM Truck and Coach in 1962. He began Speculative Construction in Northern Michigan. In 1969 he finally made the move to live up north full time. For over 30 years after his move north he owned Byrnes Construction, building many homes and projects and Creative Concrete Constructions where he built and designed many miniature golf courses, as well as working alongside his friends at Adventure Golf Services. He dated Maxine Nowak King starting in 1977 and they were married on May 13, 2005. Fondly, Bill will be remembered as a loving, fun, practical jokester, active boater, music lover, and close friend to many. Surviving Bill is his wife Maxine; children, Scott (Silvia) Byrnes of Florida, Kimberly (Travis) Fornof of Texas, Tamara Lynn “TB” Byrnes of Grand Rapids; step-children, Roger (Paula) Nowak, Faron (Disaray) Nowak; grandchildren, Chris, Corey (Kayla), Alannah, Rylan, Derek, Meaghan; great grandchildren, Scarlette and Ethan; brother Larry (Mary Ann Meyer) Byrnes, nephew Richard (Casey) Byrnes; uncles Don (Rooney) O’Hara and many cousins in the Upper Peninsula including Gary (Margie) Byrnes, Greg (Susie) Byrnes, Bobby (Nancy Johnson) Byrnes, Barb (Denny) Forsland, Billy (Jennette) Byrnes and many other cousins throughout the Country. Bill was preceded in death by his parents and several cousins. Visitation will be held from 5pm-8pm on Thursday, Oct. 31 at the Reynolds-Jonkhoff Funeral Home. A celebration of Bill’s life will be held at 11am Friday, Nov. 1 also at the funeral home with a visitation beginning at 10am.

The family of William A. Byrnes created this Life Tributes page to make it easy to share your memories.