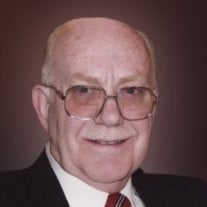 William "Bill" Clement, 71, a Traverse City native, died Tuesday evening, April 16, 2013, at Tendercare-Birchwood, following a long bout with Dementia. Born May 3, 1941, in Traverse City, he was the son of the late Frank and Viva (Davis) Clement. On January 16, 1982, at St. Michael's Lutheran Church in Traverse City, he married the former Myrna Dorothy Schoenberg Schenk. Bill shared his time and talents generously and enthusiastically throughout his life, especially to the following organization; The Traverse City Elks Lodge, #323, where he was a life member and secretary for 12 years, Eagle' s Club, American Military League and the V.F.W. #2780. His career was varied, but, he always enjoyed the challenge of working hard. Bill enjoyed tending to his yard and gardens and was so very proud of his accomplishments. In reference to Bill's journey on earth, he often said, "It's been a good life." Left to cherish his memory is his wife, Myrna Clement of Traverse City; children, Chris (Steve) Whipple, Bill (Pattie) Clement and Missy; step-children, Lisa (Eric) Zoulek, Steven (Jackie) Schemk and Rick (Kim) Schenk along with one great grandchild. Bill was preceded in death by parents and his sister, Bethel Irish. In Celebration of Bill's life, a gathering will take place at the Eagle's Club on Saturday, April 20, 2013 starting at 1:00 P.M. A light luncheon will be served and a cash bar will be available for his friends and relatives. It is suggested that those who wish to further the memory of Bill may so do by making a contribution to the Michigan Major Projects, C/O Elks Lodge #323, 625 Bay Street, Traverse City, MI. 49684 Kindly share your memories with the family on their online guestbook at www.reynolds-jonkhoff.com. Arrangements are pending with the Reynolds-Jonkhoff Funeral Home and Cremation Services. Reynolds-Jonkhoff Funeral Home and Cremation Services.

William "Bill" Clement, 71, a Traverse City native, died Tuesday evening, April 16, 2013, at Tendercare-Birchwood, following a long bout with Dementia. Born May 3, 1941, in Traverse City, he was the son of the late Frank and Viva (Davis)... View Obituary & Service Information

The family of William Donald Clement created this Life Tributes page to make it easy to share your memories.