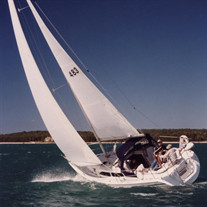 William Robert Davy, loving husband and father, software creator, musician and sailor, of Traverse City, Michigan and Sarasota, Florida passed away peacefully on July 12, 2021 at Munson Hospice House, in Traverse City after a short battle with kidney cancer. Born on June 24, 1948 at Saint Ann’s Hospital in Columbus, Ohio to Marilyn Mills and Dale Delmer Davy, Bill graduated in 1966 from Columbus South High School and from The Ohio State University in 1971. Upon graduation from OSU Bill became one of the first employees of CompuServe Information Service. He next joined Digital Equipment Corporation (DEC) where he gained familiarity with the company’s hardware and software architecture using the skills he acquired there to act as a private consultant to various companies in the Columbus area. Through his company White Rabbit, he developed innovative software, marketed by Raxco Corporation of Rockville, Maryland, to serve the needs of DEC clients around the globe. These programs included, most prominently, a disk defragmenter (Rabbit-7 aka PerfectDisk), a system tuner (Rabbit-9 aka PerfectTune, and a disk data-cacher (Rabit-11 aka PerfectCache). The holder of five U.S. and two Canadian Patents, Bill also wrote software through his Liberty Software company. More recently, he envisioned, created and developed software programs for automation of online betting on dog, harness and thoroughbred racing. In addition to his encyclopedic recall of facts and extraordinary mathematics abilities, Bill was a talented musician. Although he was able to play multiple instruments, he excelled at the piano. He had the remarkable ability to play by ear, and was a long-timer member of the Columbus Federation of Musicians. He participated in the Second Time Around Band and the Northwest Michigan College Community Band in Traverse City and performed to appreciative audiences at the Traverse City Film Festival. Bill spent many happy hours assisting the band director and coaching the track and Math Counts teams at Grizzell Middle School in Dublin, Ohio, and was a member and active supporter of the Columbus Charity Newsies. His generous contribution anchored the fundraising campaign to build the Peninsula Community Library near his home on Old Mission Peninsula. An avid and skilled sailor who loved sailing single-handed in conditions others would not even consider tackling, Bill was known to the Coast Guard and Harbormasters along the northwest Michigan coast as “that guy who’s out there when nobody else is!”. In recent years he revived his enthusiasm for golf and was a member of Heritage Oaks Golf and Country Club in Sarasota, Florida and the Club at Grand Traverse Resort in Traverse City, Michigan. He was preceded in death by his parents, Dale and Marilyn Davy and his sister Marilyn Kay Limbird, all of Columbus, Ohio. He leaves behind his wife of 49 years Nancy Whitacre Davy of Traverse City, Michigan and daughters; Megan Leigh Davy of San Francisco, California and Colleen Kay Davy of Brooklyn, New York. A memorial gathering will be held at The Boathouse Restaurant at 14039 Peninsula Drive, Traverse City, Michigan on Wednesday, July 28, from 1:00 – 3:00 PM. In lieu of flowers donations may be made to Columbus Charity Newsies at 4300 Indianola Avenue, Columbus, Ohio 43214 or to the William R. Davy Memorial Scholarship at Northwestern Michigan College, 1701 East Front Street, Traverse City, MI 49686.

The family of William Robert Davy created this Life Tributes page to make it easy to share your memories.