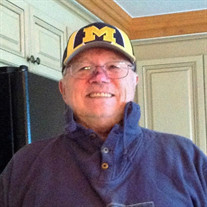 William Frank Dent, 73, of Traverse City, MI passed away Saturday, May 13, 2017 at his home, surrounded by his loving family. William was born on June 29, 1943, in Dearborn, MI, to the late Frank William and Patricia Margaret (O’Brien) Dent. He met his wife, Geraldine Ann (Magalski), at the Coral Gables dance club in Royal Oak, MI when they were both 22. Bill and Gerri were married about a year later on May 11, 1968 at St. Thomas the Apostle Catholic Church in Detroit, MI. Gerri was the love of his life, and together, they raised five wonderful children. After high school, Bill attended Eastern Michigan University and Wayne State University earning a Bachelor’s Degree in accounting and business. He enjoyed a successful career, 30 years of which were spent working for Owens Corning Fiberglass at the main headquarters in Toledo, OH. He retired in 2003 as an appointed Officer, and the Vice President of Taxes. Some of the most favorite family memories were made at their cottage on the beautiful shores of Lake Huron, in Greenbush, MI and at their home on Grand Traverse Bay in Traverse City, MI. Whether it be fishing out in the Great Lakes, sailing on the bay, taking his grandkids on a boat ride out to ‘Petoskey Beach’, tending to his flower gardens, or sitting out on his deck enjoying a Duck Poo . . . he always loved a good adventure with his family. Bill had a true zest for life. Providing for his family, and instilling a genuine love for the Great Lakes in his children, were his most important missions in life. Bill loved his wife and each of his children and grandchildren completely. He will fondly be remembered for his amazing tales, his sound advice, his witty sense of humor, his constant quest for a heated debate, and his enthusiasm for University of Michigan football. A devoted family man, he will be deeply missed by all who had the pleasure of knowing him. Bill is survived by his wife, Gerri, of 49 years; children, Deb Dent, Mike (Christiane) Dent, Laurie (Eddie) Caner, Chris Dent, and Steven Dent; grandchildren, Abbigale, Riley, Arabella, Lily, Calvin, Noah, Stella, Ada, Roscoe and Isaac; 3 brothers, 2 sisters, and many other loving family members and friends. Bill is preceded in death by his parents, and an infant sister. Visitation will be held on Tuesday, May 23, 2017, from 4-7pm, with a 7pm rosary, at the Reynolds-Jonkhoff Funeral Home. Mass will take place at 11am on Wednesday, May 24, at St. Francis Catholic Church. Burial has taken place at the Peninsula Township Cemetery. In Bill’s honor, memorial contributions may be directed to St. Jude’s Children’s Hospital. Kindly share thoughts and memories with Bill’s family at www.reynolds-jonkhoff.com

William Frank Dent, 73, of Traverse City, MI passed away Saturday, May 13, 2017 at his home, surrounded by his loving family. William was born on June 29, 1943, in Dearborn, MI, to the late Frank William and Patricia Margaret (O&#8217;Brien)... View Obituary & Service Information

The family of William F. Dent created this Life Tributes page to make it easy to share your memories.