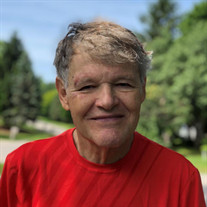 Lt. Colonel William G. Henderson (Bill) passed to his heavenly home on February 5, 2021. He was born on May 4, 1943 to William G. Henderson Sr. and Frances (Tappan) Henderson in Norman, Oklahoma. His early years were spent in Norman, later moving to Beaumont, TX where he attended high school and college. He graduated with a degree in electrical engineering from Lamar University. Bill passed away in Traverse City, Michigan where he and his wife, Mary had a home and spent summers away from the intense New Mexico heat. Prior to his distinguished career, Bill worked at Texas instruments and in the oil fields in Texas. Bill joined the Air Force in 1967 and rose to the rank of Lt. Colonel after receiving many special commendations. He was instrumental in beginning the STAR WARS Program, modified C-130 airplanes (stationed in Thailand) in the Vietnam War, worked at the Pentagon as well as other Air Force Basis in the United States. After retirement in 1989 from the Air Force, he worked as a consultant to the Air Force. Bill also taught History and Civic classes at Hope Christian School in Albuquerque, where his sons attended. Bill was an avid hiker, skier, sail boater and generally loved being outdoors. His hobbies included wood working, Master Gardening (he loved his iris and roses), playing tennis and was a good neighbor helping with any and all projects. He was a definite leader and graciously offered his skills throughout his life. He also taught many Bible classes and Sunday school classes. William was predeceased by his parents, William and Frances Henderson. His maternal and paternal grandparents were predeceased also. William is survived by his wife of 4 ½ years, Mary H. (Shumsky) Henderson, his sons, Allen (Shellie) Henderson of Verona, WI, Matthew (Jean) Henderson of Albuquerque, NM, and Scott (Chelcie) Henderson of Woodstock, GA. Also surviving are his stepdaughters, Michelle Brockie of Traverse City, MI, Nicole (Terry) Mattson of San Tan Valley, AZ, and Stephanie Day (David Bankston) of Traverse City, MI. Also surviving are his sisters, Paula (Osman) Rasuli of Woodbridge, VA and Anne (Bill) McKinney of Oklahoma. Also surviving are his grandchildren, Aydan Henderson, Hannah Henderson of Verona, WI, Ariana Brockie, Jason Brockie of Traverse City, and Brooklyn Belle Henderson of Albuquerque, NM. Military honors will be held at Reynolds-Jonkhoff Funeral home on May 4, 2021 at 11:00 a.m., with visitation starting at 10:00 a.m. Cremation has taken place. The Ceremony will be live-streamed for those unable to attend at www.rjfh.tv. Interment will take place at a future date in Great Lakes National Cemetery in Holly, MI. Memorials may be directed to the Alzheimer’s Association, the American Cancer Society, or to a charity of choice. Please feel free to share your thoughts and memories with Bill’s family at his tribute page at www.reynolds-jonkhoff.com The family is being cared for by the Reynolds-Jonkhoff Funeral Home and Cremation Services.

The family of William G. Henderson created this Life Tributes page to make it easy to share your memories.