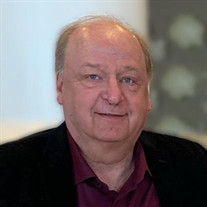 William Michael "Bill” Korreck, Sr., 61, of Traverse City passed away suddenly on Wednesday, October 14, 2020 on Old Mission Peninsula. Bill was born on Tuesday, May 12, 1959 to Cecelia Helen (Stefaniak) and Robert Joseph Korreck in Detroit. After graduating early from Groves High School, Bill attended The University of Michigan where he earned his bachelor’s degree in Environmental Engineering. On July 1, 1989, Bill married the former Debra Gwen Warner in Traverse City and they established their home here and raised their two children. In 1992, Bill founded Global Environmental Engineering and over the years led, developed, and expanded the business to reach new heights and achievements and into new ventures and territories. A devoted father, Bill especially enjoyed traveling and taking his family to special events. Garnering the truest enjoyment from life's simple pleasures, he was especially fond of family dinners, boating, household projects and being relied on as the "family handyman" - not only at his home, but at his children's homes as well. The family’s favorite trips were the ones spent together in the Bahamas. Bill's fierce selflessness will be his greatest legacy as he is remembered for his dedication to work, to family, and to helping others. Bill is survived by his wife Deb; their children, William M. "Bill" (Ellen Shanoski and her daughter, Joslyn) Korreck, Jr. of Williamsburg and Alaina Lauren Korreck of Traverse City. A time to celebrate Bill's life will begin at 2 p.m. Wednesday, October 21, 2020 at Reynolds-Jonkhoff Funeral Home. For those that are unable to attend, you may participate in the service by joining the live feed at www.rjfh.tv, click on Bill's photo and you will connect with the celebration time. For those attending in person, social distancing practices will be in place as well as mandatory face masks. The family has asked that memorial contributions be directed to For Love of Water. (FLOW, 153 ½ East Front Street, Traverse City, MI 49684 or online at www.forloveofwater.org.

The family of William Michael Korreck Sr. created this Life Tributes page to make it easy to share your memories.