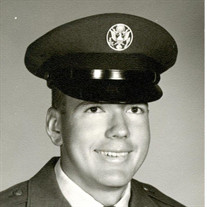 William (Bill) Loveland passed away on July 20, 2020 after a long battle with cancer. He was the son of Clarence (Bill) and Marion Loveland, born on March 12, 1944. Bill graduated from Traverse City Central in 1961 and went on to the Interlochen School of Arts where he studied percussion. From there, he went to Boston where he received more schooling in percussion. Bill played with several groups around northern Michigan. Bill had made friends with two guys in the Junior High Band, Dave MacIntosh and Denny Conant, whom have remained close friends up until Bill passed. Dave will play Taps at Bill’s burial. Bill was in the Air Force and will have a military burial. He was employed at Witmark until it closed and then BATA as a driver and trainer until retirement. He had some good friends from BATA that took him to breakfast and lunch as well as Dave and Denny. He looked forward to those times with all of you. Also his good neighbors Jason, Tina and Laurie. He loved you guys. Deb, his ex-wife, thanks Deb for all you did with food for him and support. Bill’s last job was being a volunteer at Munson Hospital as a wheelchair transporter and trainer. He loved doing this. Thanks to Dr. Peter Kohler, Bill’s Oncologist, who helped until the end. Thanks also to Munson Hospice Nurse Al. All of you were great. Bill is survived by sister, Loreen (Skeets) Bramer, ex-wife Debra Jackson, and step-daughter Lindsey Weber. He is also survived by nieces Kathy (Tim) Squires and Kelly (Bill) Loveland Hentschel and nephews Art (Kerry) Bramer, Ken (Marsha) Bramer, Tom (Kathy) Youker, Steve (Mary) Youker, Terry Loveland and Scott Loveland, many great nieces and nephews and his best buddy, Doodles the daschaund. He was preceded in death by his parents, brother Bob (Barb) Loveland, sister Eloise (John) Hancock, aunt Flora (Al) Hickin, aunt and uncle Richard (Ann) Wykes, Bill will be buried at Oakwood Cemetery. Dear Heart, you are in God’s arms now. No more suffering. We love you. Play those drums so we can all hear you. Your family.

William (Bill) Loveland passed away on July 20, 2020 after a long battle with cancer. He was the son of Clarence (Bill) and Marion Loveland, born on March 12, 1944. Bill graduated from Traverse City Central in 1961 and went on to the Interlochen... View Obituary & Service Information

The family of William "Bill" Loveland created this Life Tributes page to make it easy to share your memories.