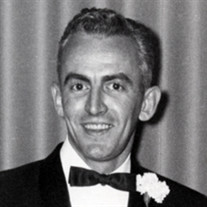 TRAVERSE CITY – William “Bill” P. McCormick, age 91, formerly of Roseville, Michigan, and more recently of Traverse City, passed away Wednesday, May 11, 2016 at the Munson Medical Center in the loving care of his family. Bill was a proud veteran of World War II, where he served as a military transport driver, ferrying artillery shells to the battle front in both the European and African wars. He was married to Laura Wright McCormick for 65 years, and their mutual love and devotion was noted by all who knew them. Bill is survived by Laura, his children, Audrey (Cy) Linder, Carolyn Burke (Richard Cicone), James (Sandi) Wright, and Robert (Josephine) Wright, as well as 10 grand-children and 13 great-grandchildren. His son, Leonard Wright, and his daughter-in-law, Sandi Wright, pre-deceased him. Bill was known for his quick wit and teasing sense of humor, and his direct manner of speaking. He loved to travel, and he and Laura visited most of the states and several countries in Europe. Bill often said that the more he traveled the more he realized that his life and his home with Laura was the best the world had to offer. Bill played the harmonica, which he learned to play during the war to occupy his quiet time. He often played for the other troops, and continued to play the rest of his life. Even a few days before his death, Bill played a few old standards for the residents of Cherry Hill Haven. A visitation for Bill will take place on Monday, May 16, 2016 at the Reynolds-Jonkhoff Funeral Home with a visitation from 2:00 pm until 4:00 pm, and 6:00 pm to 8:00 pm. Funeral services for Bill will take place on Tuesday, May 17, 2016 at the Reynolds-Jonkhoff Funeral Home at 10:00 am with a lunch to follow the service at the funeral home. Graveside services will also take place on Tuesday at 3:00 pm at the Edwards Cemetery in West Branch. In lieu of flowers memorial contributions may be directed to the Alzheimer’s Association, 921 W 11th Street, Traverse City, MI 49684. Please visit the Reynolds-Jonkhoff Funeral Home website www.reynolds-jonkhoff.com to share your thoughts and memories with the family.

The family of William Peter McCormick created this Life Tributes page to make it easy to share your memories.