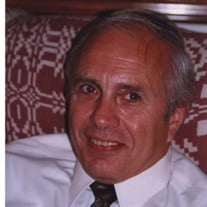 William Marshall Miller died unexpectedly at his home January 22, 2021 at the age of 83. Bill was born March 19, 1937 in Traverse City to the late Noel (Nick) and Elsie (Ruthardt) Miller. Bill grew up on the family farm, was a graduate of Honor High School, and attended Northwestern Michigan College. He served in the US Navy where he studied electronics, which was a passion of his for the rest of his life. Bill worked for General Electric in Germany which enabled him to regularly ski in the Alps. He joined Honeywell working with computers and retired from the State of Michigan as an IT Systems Security Officer. He married Joalyn Stapley in Phoenix, AZ in 1967 and they raised their family in Troy and then Grand Rapids, MI. Bill married Dorothy Pullen in 1993. They delighted in building and enjoying their retirement home on Long Lake and loved skiing and dancing together. Bill was an avid snow and water skier, family history genealogist, auto enthusiast, runner, tennis and ping pong player, wood cutter, chess player, and Mr. Fixit. He repaired computers for free for all his friends. He was a member of and contributed to the Twin Bay British Car Club, Lake Ann Lions Club, Professional Ski Instructors Association, and the Long Lake Foundation. Known to be ever active, Bill raced in -and won many - downhill ski events each Thursday at Crystal Mountain right up until this past Spring. Bill was an active member of the Church of Jesus Christ of Latter-day Saints and held the office of High Priest in the Melchizedek Priesthood. He was a vigilant home teacher and ministered to many families. He held many church callings including Family History Leader and Elder's Quorum Instructor among other leadership callings. He performed temple ordinances for his family and others, and entered the spirit world as a current temple recommend holder. Bill is survived by his younger brother Louis (Karen) and sister Roberta; first wife Joalyn and children Marshall, Heidi, Eric (Sandra), and Bethany (Brent); his grandchildren Corbin, Jordan, and Chandler Miller; Davis, Graydon, and Nadine Wood; Aracilla, Soren, Sophia, and Christine Ream; Charisse, Brielle, Sven, and Elise Miller; Gage, Malcolm, and Logan Egnew. He will be greatly missed by all. Services will be held in early summer. Remembrances may be directed to the Almira Historical Society, PO Box 91, Lake Ann, MI 49650-0091. Those wishing to share a memory or condolences may visit www.reynolds-jonkhoff.com

William Marshall Miller died unexpectedly at his home January 22, 2021 at the age of 83. Bill was born March 19, 1937 in Traverse City to the late Noel (Nick) and Elsie (Ruthardt) Miller. Bill grew up on the family farm, was a graduate of Honor... View Obituary & Service Information

The family of William Marshall Miller created this Life Tributes page to make it easy to share your memories.