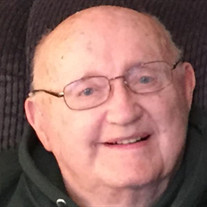 Traverse City - William E. Moore, 89, of Traverse City, passed away February 2, 2015, at Munson Medical Center. Bill was born on November 4, 1925, in Detroit, the son of Morris H. and Allie E. (Lindquist) Moore Sr. On February 25, 1956, at Christ the King Church in Grosse Pointe Woods, he married Adell A. Scrine, who survives. Bill worked as a teacher, department head for the City of Dearborn, and was an automobile dealership owner. His dealerships included Bill Moore Ford in Carlton, MI., and Felty Moore Ford in Chesaning, MI. Bill served his country honorably as a member of the United States Navy in World War II. During his time in Dearborn, Bill served 47 years as the Recreation Commissioner for the City, where he also ran the Veteran's Bureau. He was a lifetime member of the American Legion and the Elks. In his spare time, he enjoyed working on cars. Bill enjoyed working so much that he worked full time until he was 82, most recently for Etna Building Supply. In addition to his wife Adell, Bill is survived by his son, William R. (Kathy Ann) of Howell; daughter, Kathleen Moore Begin (George Hill) of Traverse City; his former son-in-law, Keith Begin, brother, Morris (Alice) Jr., of Dearborn; grandchildren, Nicholas and Kristina Moore of Howell, MI.; and Trevor, and Blake (Danielle) Begin of Traverse City; and several nieces and nephews. A memorial service celebrating Bill's life will be held at the Reynolds- Jonkhoff Funeral Home on Thursday February 5, 2015 at 3:00 p.m., with visitation one hour prior, with Pastor Jim Helman officiating and Military Honors by the Cherryland Post #2780 V.F.W. Bill's family would like to thank Traverse Manor for the wonderful care and tolerance of Bill's feisty personality. GO GREEN! Memorial contributions may be directed to the Alzheimer's Association, 921 W. Eleventh St. #1W, Traverse City, MI 49684 Please visit www.reynolds-jonkhoff.com to share your thoughts and memories with the family. The family is being served by Reynolds- Jonkhoff Funeral Home and Cremation Services.

The family of William E. Moore created this Life Tributes page to make it easy to share your memories.