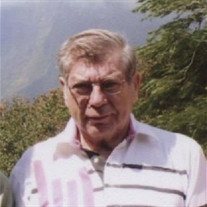 Buckley-William Rackow William Rackow of Buckley passed away May 8, 2014 at the age of 76. Bill graduated from Mesick High School and worked for the Grand Traverse Road Commission from which he retired after 30 years of service. Bill also farmed while he was employed and continued to do so after his retirement, farming was something Bill cherished and was his passion, he and his best farm hand Margaret worked side by side for many years doing what Bill loved the most. When Bill had any spare time he also liked to go camping, hunting and just spending time in the woods. He also belonged to the Dare All Squares Dance Club and Joy's Melodies. All of the area farmers could depend on Bill to offer a helping hand if it were needed, he was always there and ready to help. Bill was preceded in death by his parents, William and Pauline(Uhan)Rackow, brothers, Clarence, Cleo, Charlie and Albert, sister, Rose Mary and his brother- in- law Harold Canfield. He is survived by his loving wife Margaret "Dolly" Canfield Rackow, daughter; Shelly(Mark)Meinema, son; William(Lisa) Rackow. Grandchildren, Joshua Stark, Rachel (Jason) Ewing, Mitchell and Betsy Rackow, step grandchildren, Jacob, Justin, Logan, amd Landan Meinema, a sister, Marilyn Wareham of Interlochen; Brother and sister in laws, Art(Janet) Canfield, Carol Canfield, Helen Wisniewski, Joseph(Elaine) Flees, Linda, Lois and Beverly Rackow. Visitation will be held at the Grant United Methodist Church in Buckley on Monday May 12, 2014 from 4PM to 7PM. A Funeral Service will take place at the church on Tuesday at 11:00AM The family entrusted the care of Bill to the Reynolds-Jonkhoff Funeral Home and Cremation Services. In lieu of flowers memorials in Bill's name may be made to the church. Please visit www.reynolds-jonkhoff.com to share your memories of Bill

Buckley-William Rackow William Rackow of Buckley passed away May 8, 2014 at the age of 76. Bill graduated from Mesick High School and worked for the Grand Traverse Road Commission from which he retired after 30 years of service. Bill also farmed... View Obituary & Service Information

The family of William Rackow created this Life Tributes page to make it easy to share your memories.

William Rackow of Buckley passed away...