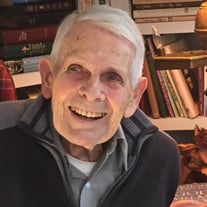 William S. Rechenbach, 95 of Traverse City passed away September 12, 2021 at Munson Hospice House with his family by his side. Bill was born on January 22, 1926 in Essen, Germany to the late Wilhelm and Martha (Kipp) Rechenbach. On February 28,1948 he married the love of his life, the late, Theresa (Maier) Rechenbach in Ludwigsburg, Germany. Bill and Theresa immigrated to the United States after they married and made their home in Detroit, MI. Bill and Theresa never took for granted the opportunity that was given to them to live in the United States. He was a very patriotic American throughout his life and he greatly appreciated the freedoms that are foundational to this country. Bill earned a Bachelor’s Degree in Mechanical Engineering from Wayne State University and served as an engineer for General Motors for over thirty years. During his tenure there, he developed several patents in the die-face engineering area. Upon retirement in 1988, they moved to Traverse City to enjoy the beauty of our area. He enjoyed swimming, reading, automobiles and keeping up with current events. He always kept an eye on the market and politics and loved discussing both with others. Above all else, Bill was passionate about sharing the saving message of Jesus Christ and his love for the Lord. They were devoted members of Faith Reformed Church. He will be remembered for his warm and welcoming smile, his beautiful blue eyes, a prayer warrior, and as an encourager to all. Bill was preceded in death by his parents, his beloved wife Theresa in 2009; brother Fred Rechenbach and sister Inge Grass. Bill is survived by his daughters Barbara (Jerry) Younglove of North Branch, MI and Patricia (Gary) Chapman of Byron Center, MI ; granddaughter Lauren Resi (Devon) Stonerock of Jacksonville, FL, several nieces and nephews in the United States and Germany and a host of friends. The Celebration of Life Service will be held on Friday, September 17, 2021 at 1:00 pm, with visitation beginning at 12 noon at Faith Reformed Church. Interment will follow at Grand Traverse Memorial Gardens. Memorial contributions may be directed to Tunnel to Towers Foundation and Faith Reformed Church. Please visit www.reynolds-jonkhoff.com to share your memories with the family.

William S. Rechenbach, 95 of Traverse City passed away September 12, 2021 at Munson Hospice House with his family by his side. Bill was born on January 22, 1926 in Essen, Germany to the late Wilhelm and Martha (Kipp) Rechenbach. On February... View Obituary & Service Information

The family of William S. Rechenbach created this Life Tributes page to make it easy to share your memories.