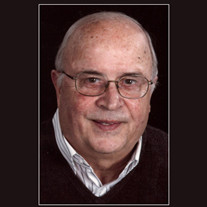 William John Siler, 80, of Traverse City, passed away unexpectedly Saturday, March 10, 2018 at his home. Bill was born on Monday, May 10, 1937 in Merrill, Michigan, to Ida Marie (Feldtman) and Ralph Xavier Siler. He graduated from Sacred Heart Academy in Merrill, Michigan , and furthered his education at Ferris State (College) University, where he majored in Personnel Relations and Business Law. Bill had been an active participant in his Catholic faith. While growing up, he served as an altar server and as a member of St. Francis Parish in Traverse City, he served as an Eucharistic Minister, Lector, was a co-coordinator of Men’s Spiritual Direction and also was chairperson of the Global Solidarity Partnership through the Dioceses of Gaylord and Matagalpa, Nicaragua. Prior to his retirement, Bill was employed as the Director of Personnel, Training and Development for Wolohan Lumber Company. He was an active member of the Kiwanis Club of Traverse City, of which he was a past president and was also a Fourth Degree Knight with the Knights of Columbus. Bill and Deanna loved their home, where they could be on the bay. Bill was meticulous about his yard and thoroughly enjoyed feeding the birds and viewing the other wildlife that would visit the feeders. He really enjoyed animals and his dog. He was an avid reader of different genres and especially enjoyed the time he could spend with his family. Bill is survived by his wife of 60 years, Deanna Jo (Dorr), whom he married on Saturday, October 19, 1957 at St. Mary’s Catholic Church in Hemlock; his children, Connie (Dr. Mark) Davenport of Traverse City, Kolleen (Mark) Homuth of Mt. Pleasant, Kevin Siler of Sparta; his grandchildren, Megan (Lucas) Cooper of Portage, Rachel (Andrew) Rising of Oswego, IL, Jordan Davenport of St. Clair Shores, Chad Homuth of Minneapolis, MN, Kyle Homuth of Traverse City; his great grandchildren, Shane, Levi and Davis Cooper and Sadie and Finley Rising. Also surviving is his brother, Father Paschal Siler, OFM, Cap of Appleton, WI. Bill was preceded in death by his sons, Kurt and Craig Siler, his parents and a brother, Raymond Siler. Visitation for Bill will take place from 5 until 7 p.m. Tuesday, March 13 at The Reynolds-Jonkhoff Funeral Home with the rosary being prayed at 7 p.m. The Mass of Christian Burial will begin at 11 a.m. Wednesday, March 14 at St. Francis Catholic Church, with visitation one hour prior to the mass. The Rev. Father Benjamin Rexroat will celebrate the mass. Interment will take place at St. Andrew Catholic Cemetery in Saginaw on Thursday, March 15 at 1 p.m. Bill had asked that memorial contributions in his memory would be directed to Right to Life-Grand Traverse P. O. Box 5416, Traverse City, MI 49696 or to St. Francis Catholic Church, 1025 S. Union Street, Traverse City, MI 49684.

William John Siler, 80, of Traverse City, passed away unexpectedly Saturday, March 10, 2018 at his home. Bill was born on Monday, May 10, 1937 in Merrill, Michigan, to Ida Marie (Feldtman) and Ralph Xavier Siler. He graduated from Sacred... View Obituary & Service Information

The family of William John Siler created this Life Tributes page to make it easy to share your memories.