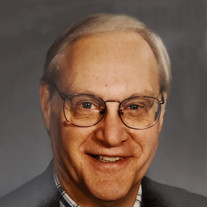 William Dennis Smith, 83, of Traverse City passed away peacefully Sunday, October 11, 2020. Bill was born on Friday, May 7, 1937 to the late Vivian Mercedes (McMinn) and Arthur Dunn Smith in Detroit. He attended Redford High School participating in Football and Track and Field. He earned all-state honors in football. He later attended Central Michigan University where he earned his teaching degree along with playing football for the Chippewas. In addition, while at CMU he met the love of his life, and on Saturday, August 22, 1959, he married Lee Ann Seidel in Saginaw. Bill and Lee Ann moved to Harbor Beach where he taught history and coached football for a couple of years. They then moved to East Lansing and Bill earned a Master's Degree in Social Work from Michigan State University. After graduating from MSU, Bill and family moved to Traverse City where they have resided the last 55 years. Bill was a social worker at Child and Family Services. Bill said that one of his greatest experiences was his association with people at Child and Family Services, especially foster parents and staff. For many years, he and Lee Ann were members of Bethlehem Lutheran Church where they were active in many ministries of the church. He enjoyed sports and became an accomplished racquetball player. He also enjoyed antiques, history, and was a collector of Royal Dalton Character Jugs. Bill is survived by his wife Lee Ann; their sons, Tracy W. (Marci) Smith of Ludington, Terry A. (Lindsay) Smith and James C. (Linda) Smith, all of Traverse City; grandchildren, Amanda (Chad) Rasmussen, Andrew Smith, Jack, Brady, Bennett, Finley and Carson Smith; great -grandchildren Kayleigh, Harper, Mason, Norah and Oliver and great great granddaughter, Jadyn. At Bill's request, a private family service will take place. Interment will be in Grand Traverse Memorial Gardens. Bill had requested that those that would wish to remember him through a memorial contribution, that the gift be directed to Child and Family Services, 3785 Veterans Dr., Traverse City, MI 49684 or online at www.cfsnwmi.org/donate.

The family of William Dennis Smith created this Life Tributes page to make it easy to share your memories.