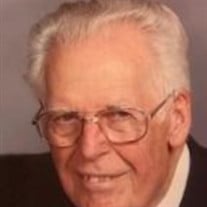 William Rodger Steffler, 99, passed away on December 22, 2021 in Grand Rapids. Bill was born in Flint on October 7, 1922 to Joseph and Nina (Rodgers) Steffler. On September 4, 1948, in Flint, he married Vera Margery Thomas, who preceded him in death in 2015. Bill honorably served his country in the US Army’s 103rd Infantry during World War II. Following the war, he returned home to Flint. Bill graduated from the GM Institute with a bachelor’s degree in Industrial Engineering in 1950. His career was spent at Buick where he retired in Summer, 1980 as Superintendent of Quality Engineering. He and Vera moved to Traverse City following retirement. Bill was a parishioner of St. Patrick Catholic Church. He was actively involved in the early days of the Traverse City. History Center and volunteered his time with SCORE. To say Bill enjoyed woodworking would be an understatement as his artistry included carving, furniture building, home construction, refinishing, boat building, restoration, clock making, picture framing, welding, blacksmithing, scrimshaw, jewelry making and bead work. He enjoyed painting in watercolors and drawing in charcoal. Amid his many accolades and accomplishments, when asked what the most important question of his life was, Bill replied, “Asking Vera, would you like to go to the ice capades?” Bill is survived by his children; Thomas (Kathy) Steffler of South Haven, Nancy (Dennis) Bekken of Byron Center, and Michael Steffler of Grand Rapids; six grandchildren and 5 great grandchildren. In addition to Vera, he was preceded in death by his parents; a daughter, Mary Lou Steffler; and seven siblings. A funeral service celebrating Bill’s life will be held at Reynolds Jonkhoff Funeral Home on May 21, 2022 at 3:00pm with visiting from 2-3pm. Burial will take place at Monroe Center Cemetery. For those wishing to give a gift in memory of Bill, contributions may be directed to Mid-Michigan Honor Flight or Saint Patrick Roman Catholic Church in Traverse City Funeral arrangements have been entrusted to the Reynolds-Jonkhoff Funeral Home. Please visit Bill’s tribute page at www.reynolds-jonkhoff.com

William Rodger Steffler, 99, passed away on December 22, 2021 in Grand Rapids. Bill was born in Flint on October 7, 1922 to Joseph and Nina (Rodgers) Steffler. On September 4, 1948, in Flint, he married Vera Margery Thomas, who preceded him... View Obituary & Service Information

The family of William "Bill" Steffler created this Life Tributes page to make it easy to share your memories.