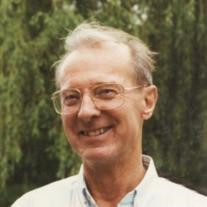 Traverse City-William R. "Bill" Sweet, 82, of Interlochen, died Thursday morning, January 17, 2013, at Munson Medical Center, following a brief illness. Born March 22, 1930, in Allegan, he was the son of the late Leonard Sweet and Dora (Doty) Sweet. He grew up in the South Lansing/Holt area, and graduated from Lansing Eastern High School. Mr. Sweet worked for Western Union, Oldsmobile, and the S.S. Kresge Company. He later graduated from the Flint Barber Seminary and worked for 30 years as a barber in Lansing and Holt. He eventually owned and operated the Esquire Barber Shop in Holt. He moved to Interlochen after his retirement in l989. Bill had a life-long interest in local politics and public service. He was a Justice of the Peace, a Township Trustee and a County Commissioner. He served as Chairman of the Ingham County Board of Commissioners in 1979 and 1984. At the time of his death he was a member of the Green Lake Township Board of Review. Mr. Sweet was involved in many community organizations. He served as a Cub Scout and Boy Scout leader. He was a member of the Holt Masonic Lodge, the Holt United Methodist Church, the Grawn United Methodist Church, and the Democratic Party. He enjoyed fishing, traveling and restoring antique cars and trucks. He was an active member of the Cherry Capital Model A. Club. He was preceded in death by his parents and his brothers, Leonard Sweet, Jr., Donald Sweet and Gordon Sweet. Surviving are his wife of 58 years, Anna M, (Mansfield) Sweet of Interlochen; his sons, Guy (Susan) Sweet, of Holt and Roy Sweet, of Holt, and his grandchildren, Justin Sweet and Jessica Sweet, of Holt. Friends may call at the Reynolds-Jonkhoff Funeral Home on Sunday, January 20, 2013, from 2:00 P.M. to 4:00 P.M., where the family will receive friends. Funeral Services will be held at Grawn United Methodist Church on Monday, January 21, 2013, at 2:00 P.M. with visitation one hour prior to the service. Rev. Mary Brown will officiate. Cremation will follow. A Memorial Service will be held on Sunday, January 27, 2013 at 3:00 P.M. at the Holt United Methodist Church, Holt, MI. In remembrance of Bill, memorials may be directed to the Building and Grounds Fund C/O Grawn United Methodist Church, 1260 S. West Silver Lake Road, Traverse City, MI. 49684 Kindly share your memories with the family on their online guest book at www.reynolds-jonkhoff.com Arrangements were made with the Reynolds-Jonkhoff Funeral Home and Cremation Services.

The family of William Ralph Sweet created this Life Tributes page to make it easy to share your memories.