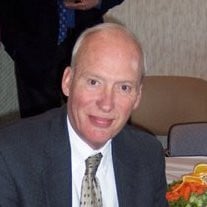 William “Bill” Patrick, 72, of Traverse City passed away peacefully on Wednesday, February 6, 2013. Bill was born on May 13, 1940 in Detroit, Michigan to the late Thomas and Arbutus (Deadman) Patrick. The family moved to Cedarville, Michigan when he was very young, and then to Traverse City, Michigan when he was in grade school. Bill was a 1958 graduate of Traverse City High School where he excelled in athletics, including baseball, basketball, and football. He then attended the University of Michigan where he earned both his Bachelor and Masters Degrees, and was a member of Lambda Chi Alpha Fraternity. While in college he met and married his wife of almost 50 years, Anne Louise Pigman. They were married in Downers Grove, Illinois on August 24, 1963. Bill started his career at General Electric, working in marketing for both the Television (Portsmouth, Virginia) and the Home and Laundry (Louisville, Kentucky) divisions. He then went on to work for American Tourister (Warren, Rhode Island) before moving back to his home town of Traverse City in 1983, where he finished his career as a manager for Real Estate One. A sports enthusiast, Bill enjoyed attending and watching sporting events, especially the Detroit Tigers. He also was a regular on the Crown Golf course and enjoyed sharing his love for golf, fishing and baseball with his grandchildren. After retirement, Bill and his wife Anne enjoyed spending their winters in Sarasota, Florida, where he could continue enjoying the outdoors. Bill was always very generous with his time. Every year during the Cherry Festival he assisted with the Festival of Races by standing and directing the way for racers as they made the turn by the Real Estate One building onto Front Street. Many in the community may remember Bill from the years he served as a volunteer for the NMC BBQ. He also loved helping his grown daughters by sprucing up a room with a fresh coat of paint or helping with landscaping. Surviving Bill are his wife Anne, daughters Kristin (Mike) Fisher of Lexington, Kentucky, Kathleen Patrick of Traverse City and Kari (Scott) Willmott of Traverse City, and grandchildren Kaylea and Julianne Fisher, and Patrick, Parker, Tanner and Annabel Willmott. Also surviving are brothers-in-law and sisters-in-law: Michael Lamson, Richard and Terry Pigman, John and Sue Pigman, Marcia Sandler, and Roger and Sarah Tellefsen. Bill was preceded in death by his sister Betty Lamson. A Memorial service honoring Bill will be held at 1:00 P.M. on Saturday, May 18, 2013 at Central United Methodist Church, located at 222 Cass St. in Traverse City. Those planning an expression of sympathy may wish to consider memorials to Central United Methodist Church, 222 Cass St., Traverse City, MI 49684.

William “Bill” Patrick, 72, of Traverse City passed away peacefully on Wednesday, February 6, 2013. Bill was born on May 13, 1940 in Detroit, Michigan to the late Thomas and Arbutus (Deadman) Patrick. The family moved to Cedarville, Michigan... View Obituary & Service Information

The family of William "Bill" Patrick created this Life Tributes page to make it easy to share your memories.