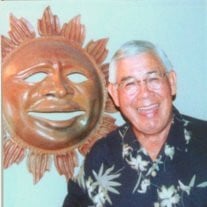 TRAVERSE CITY -William “Bill” Russell, 77, of Traverse City, died May 8, 2013 at home with his loving family. Our beloved husband, dad, grandpa “Bopa” and uncle was born on December 21, 1935 in Traverse City to the late Clarence and Margaret (Southbird) Russell. On October 4, 1997, in Traverse City, he married Barbara Anne Mello, who survives. Upon earning his master’s degree, Bill enjoyed a varied career, beginning as a school teacher in Chesaning, Buckley and Suttons Bay, where he also coached basketball. In 1975, he began Nish-Nah-Bee Industries in Traverse City, and the business thrived until 1998 when he retired. He seized the opportunity to make the American dream a reality for himself and for the many people he employed. Bill was an active member of AA, which was an integral part of his spiritual path. He was proud of thirty-two years of sobriety. Bill served his country honorably in the Marine Corps including serving in the Korean War era. In addition to being a devoted grandpa he enjoyed spending his time with family and friends. Bill’s interests included golfing, gardening, home improvement , and reading . In addition to his wife, Bill is survived by his daughter, Jennifer Ligon and her children, Mae, Jacob and Miles, of Traverse City; his son, Wm. Dodd Russell and his children Anna and Will, of Traverse City; stepdaughter, Rachel (Rob) Davies and their children, Collin and Caitlin, of East Grand Rapids; sisters, Doris Struble and Nettie Keusch, of Traverse City; brother Eddie Russell, of Traverse City; and sister, Ivanna Swainston, of Wayland MI; nieces, Jane (Joe) Rohl, Cheryl (Doug) Weathers, Judi (Greg) Blackmer, Jo Keusch, RaeAnn (Ron) Andrews, Carol Snyder, Alice Markus, Becky Russell, Pamela Russell; nephews, Bob Markus, John Markus, Mark Russell, David Russell, Raymond Russell. In addition to his parents, he was preceded in death by his brothers, Ivan, Isaac and Carl; sisters Mary and Myrtle; niece Janet Brigham; nephews Jon Struble, Allen Russell and Michael Russell . A memorial service will be held in Bill’s honor on Wednesday, May 15, 2013, at 3:00 P.M. at the Reynolds-Jonkhoff Funeral Home. Visitation will take place one hour prior. In honor of Bill’s memory, and in lieu of flowers, a donation may be made to assist his special needs grandson, Jacob Ligon. Please make donations payable to Jacob Ligon by mailing a donation to: Traverse City Record-Eagle, PO Box 1124, Traverse City, MI 49684. You may also share your thoughts with Bill’s family at his online guestbook at www.reynolds-jonkhoff.com. The family is being served by the Reynolds-Jonkhoff Funeral Home and Cremation Servicesf.

TRAVERSE CITY -William “Bill” Russell, 77, of Traverse City, died May 8, 2013 at home with his loving family. Our beloved husband, dad, grandpa “Bopa” and uncle was born on December 21, 1935 in Traverse City to the late Clarence and Margaret... View Obituary & Service Information

The family of William "Bill" Russell created this Life Tributes page to make it easy to share your memories.