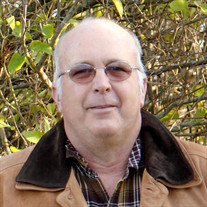 It’s with sadness that we announce the passing of Anthony “Tony” Paul Andrus on November 19, 2021, at Munson Medical Center after a brief illness. Born February 24, 1956 at the same hospital, Tony grew up on the Old Mission peninsula, helping on the family orchards. As he grew older, he realized his passions lay not in farming, but in electronics. Self-taught, he was always buying, building, tearing apart or putting together some new gadget or gizmo. He was the first person in the family to own a VHS player something his younger nieces and nephews thoroughly appreciated. This aptitude lead to a career as a technician at the Peninsula Telephone Company (eventually bought by AcenTek), that lasted the rest of his life. When not fixing other people’s gadgets, he enjoyed fishing, including annual trips to Canada with a friend. He also had a passion for photography, especially capturing wildlife. He would often wait for hours outside of a hole in the ground just to snap a picture of a fox kit when it emerged. This appreciation of animals also lead him to always having a cat or two around the house, usually strays he would name after the orchards or bushes he found them hiding in, such as Peaches, Apricot and Holly. Tony also enjoyed cooking, especially barbecuing and smoking, and could very well be described as a “foodie”, though he would undoubtedly be miffed at such a pretentious title. Family gatherings were always a good excuse to try out a new barbecue sauce or soup he had been experimenting with. He was politically active and enjoyed “sparring” on a variety of political topics. He was also an active volunteer member of the Peninsula Fire Department for many years, helping many of his friends and neighbors around Old Mission in times of crisis. When talking about him, his “gentleness” and “kindness” are the words most often used to describe him. Born to the late Lawrence "Bud" and Bessie "Betty" (Helfrich) Andrus, and preceded in death by one sister, he is survived by one brother, two sisters, a cat, and a community left just a little better by him being in it. In lieu of flowers, memorial donations may be made to the Cherryland Humane Society (cherrylandhumane.org) or a charity of your choice. Per his wishes, he will be cremated and a gathering to celebrate his life will be held at a later date. Reynolds-Jonkhoff Funeral Home and Cremation Services is caring for Tony and his family, www.reynolds-jonkhoff.com

The family of Anthony "Tony" Paul Andrus created this Life Tributes page to make it easy to share your memories.

It’s with sadness that we announce the passing of Anthony “Tony”...