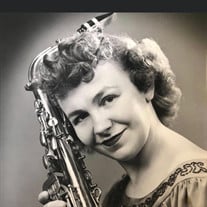 Marion Ella Greene, our dearest Mom and Grammy, passed away peacefully at the age of 94, on Saturday, June 13, 2020, at the home of her daughter and son-in-law in Kewadin, MI. She was born in Minden City, in Michigan’s thumb area, on November 12, 1925, the youngest of four children, to Bert Teeple and Ella (Jacobs) Teeple. She was fondly referred to as “Teep” by family, including her husband, Bill, whom she met in her early teens. Marion attended Deckerville High School, graduating at the age of 16. She began pursuing her college degree at Albion, and Bill would hitchhike there from Michigan State University, where he was attending, to visit her on the weekends. She transferred to MSU where she pursued a Bachelor of Music degree. On February 24, 1945, she married William R. Greene in Detroit. She accompanied him to Fort Bragg, NC, as he continued his military service, which included active duty in the Philippines. Eventually, they graduated from MSU, Marion with a teaching certification, and Bill with an accounting degree. They lovingly welcomed three daughters into the family, Janet, Nancy and Sue. Although she never had formal musical training until college, Marion was a remarkably talented musician, who was blessed with the unique gift of perfect pitch. She was accepted into the MSU marching band as the first female saxophonist, where great efforts were made to disguise her femininity during performances (men were scarce due to the war). Marion’s musical endeavors involved playing saxophone in several groups, including her own all-girl jazz ensembles who performed in the Detroit area. She was a school music teacher, an accomplished piano instructor, a church choir director at Orchard Methodist in Farmington Hills, and the director and music arranger of a championship Sweet Adelines chorus. She also found time to volunteer at Providence Hospital for 25 years. During their married life Marion and Bill lived in Redford, Livonia, Farmington Hills, Milton Township and Traverse City. After obtaining his CPA, Bill began a 30-year career at Ford Motor. His job took him to many foreign locations, and Marion was able to accompany him on numerous trips to Europe and Japan. They even enjoyed owning a condo in Spain for a time. They loved their vacation homes in Murphy, NC, Cass City, MI and Lakeland, FL, which accommodated their lifelong devotion to the Detroit Tigers. They were often thrilled to chat with members of the Tiger organization who golfed on the course in the backyard of their Lakeland condo. The most remarkable attribute Marion possessed was her unwavering love and support of her family. Their world was rocked by the sudden passing of daughter Nancy while she was student teaching music through MSU in London, England. They were again dealt a blow when Jan lost her husband, Jack, to cancer, leaving three little girls without a dad. Grammy and Grampy immediately stepped in to love and nurture their granddaughters. Their assistance allowed Jan to continue her career as a high school music teacher, and church organist and choir director. The church choir director position was first held by Marion, then by Jan, and eventually Jan’s daughter, Jamie, for a combined 50 plus years. The granddaughters shared an incredibly close loving bond with their grandparents that continued throughout their lives. Grammy and Grampy were also the biggest fans of Sue and Kurt’s sons, cheering on all their performances, including piano and dance recitals, soccer, tennis and basketball games, band concerts and musical theater productions. Grammy’s musical legacy is entirely evident in her children and grandchildren – it was a huge part of our upbringing, and came naturally because of her. Marion possessed a great sense of humor. She engaged in conversation and made an effort to listen and learn from people. Although only 5 feet tall, she easily took charge of the groups she directed, with lots of laughs along the way. Dad had a much quieter demeanor (they were a perfect fit) and always supported her musical endeavors, whether setting up chairs for her choir rehearsals, or waiting for her on the steps of the Army officer’s club before he was allowed in, while Marion finished a late night sax gig. Marion and Bill celebrated 61 years of marriage before he passed from complications of Parkinson’s disease, for which Mom nursed him for 20 years. She had courage and a sense of duty - the traits of our greatest generation which aren’t always exhibited these days. Mom and Dad personified dedication, perseverance, generosity and loyalty. Marion was preceded in death by daughter Nancy, son-in-law Jack, sister Ruth, brothers Don and Harry, and the love of her life, husband Bill. She is survived by two daughters: Jan Brachel of Tucson, Arizona, and granddaughters Jamie of Tucson, Arizona, Joni of Dallas, Texas and Jaclyn of Clarkston; daughter and son-in-law Sue and Kurt Schumacher, and grandson Kyle (Kate) from Kewadin, and grandson Jay, a music teacher in Bloomfield Hills. Great grandchildren Jayden, AJ and Jackson survive as well. Marion is also survived by several nieces and nephews, including her beloved nephew, Don Teeple. The family would like to thank Marion’s dear friend, Dawn Champigny for her devotion through the years. We’d also like to thank her lovely neighbors, Jean, Ron (Pat), and Dee (Bob), who provided great friendship, comfort and security. Thanks as well to Munson Hospice for their comfort during her final days. Marion is ingrained in the hearts of her family and will be remembered with intense love, honor, respect and laughter. We will all miss her terribly and trust she’s reunited with loved ones in heaven. Her family on earth will never be the same without her, and will cherish every wonderful minute we shared with our beloved Grammy. Due to the current situation, a family memorial will take place at a later date. Interment will be at Glen Eden Cemetery in Livonia. Arrangements are being handled by Reynolds-Jonkhoff Funeral Home. Please visit her tribute page at www.Reynolds-Jonkhoff.com

Marion Ella Greene, our dearest Mom and Grammy, passed away peacefully at the age of 94, on Saturday, June 13, 2020, at the home of her daughter and son-in-law in Kewadin, MI. She was born in Minden City, in Michigan&#8217;s thumb area, on... View Obituary & Service Information

The family of Marion Ella Greene created this Life Tributes page to make it easy to share your memories.