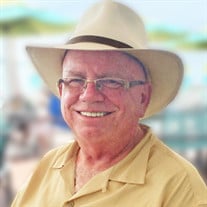 Murdoch T. Campbell, affectionately known as “Doc”, passed away surrounded by his loving family on September 17, 2019. Beloved husband of Deborha for 32 years. Loving father of Katy Podolan, Margaret Campbell and Ashley Campbell. Dearest grandfather of Anna and Kathryn. He is also survived by his sister Mary, nephews John (Sheryl) and Michael (Trisha) and niece Kathy (John). Doc’s strong will to live, the unwavering support of Deborha, and family and friends carried him through his final months fighting Acute Myeloid Leukemia. Doc was born in Detroit on March 30, 1946 to John and Mary Campbell. As a teen he played the bagpipes with the St. Andrews Society. While growing up in Detroit, Doc attended Catholic school and graduated from St. David Catholic High School before attending Michigan State University where he received his B.A. in Accounting. He also received his M.B.A. from The University of New Orleans, where he later taught Accounting. Doc was a licensed Certified Public Accountant in both Michigan and Louisiana. Doc spent most of his career working for Brown-Campbell Company, a steel fabricating and warehousing business started in 1952 by his father. He and his brother John spent many years tirelessly working to grow the company, which expanded from a single warehouse in Detroit to seven service centers across the country. As a youth, Doc took flying lessons and enjoyed telling people that he soloed an airplane before he even had his driver’s license. He continued to fly as an adult, eventually earning his commercial pilots license. To celebrate his 50th birthday he traversed the Atlantic in a single engine propeller plane. As a car enthusiast, Doc joined the Mercedes Benz Club of America and served as National President from 1986-1988. Doc was a Mensa member and believed in lifelong learning. In his 60s he went back to school, earning a Bachelor of Arts, with honors, in German Language and Literature from Oakland University in Rochester, Michigan. He was an avid reader, always in the process of reading one or two books at a time. Doc particularly loved biographies and history books. He had a deep appreciation for other cultures and thus travelled extensively, visiting more than 20 countries on five of the seven continents and studied German in Switzerland for a few months. Doc was also a passionate photographer and enthusiast. You can view some of his work, which includes photographs of his many travels, at http://www.photosbydoc.com. Doc also regaled his friends and family with tales from his life and travels. His enthralled audience was just one demonstration of Doc’s skill at crafting a narrative. Doc’s sense of humor amused everyone throughout his life, with his children often requesting stories of his childhood pranks or jokes that not only led to unending laughter but sometimes eye rolling at their ridiculousness. Doc’s contagious smile and laughter will be missed. As an expression of sympathy, memorial contributions may be sent in Doc’s name, to St Jude Children’s Research Hospital, 262 Danny Thomas Place, Memphis, TN 38105. A funeral service honoring Doc will be held 11:00 a.m., with visitation starting at 10:00 a.m. on Friday, September 27, 2019 at the First English Lutheran Church, 800 Vernier Road, Grosse Pointe Woods, MI 48236. Pastor Sean Motley will officiate. Please feel free to share your thoughts and memories with Doc’s family at his tribute page, https://www.reynolds-jonkhoff.com/obituaries/Murdoch-Doc-Campbell/. The family is being cared for by the Reynolds-Jonkhoff Funeral Home and Cremation Services.

The family of Murdoch "Doc" T. Campbell created this Life Tributes page to make it easy to share your memories.